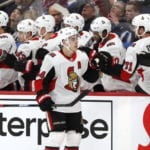 Chris Johnston: (yesterday after the run of trades) “It’s no coincidence that there’s been a surge in deals involving defencemen this afternoon. A lot of overlapping conversations/expressions of interest with the teams and players that were moved.”

He has 30 goals alongside Vadim Shipachyov in 55 games.

Renaud Lavoie: Have been told that contract talks between the Ottawa Senators and Jean-Gabriel Pageau are ongoing. (as of late yesterday afternoon)

Shawn Simpson: Hearing that talks between the Senators and Pageau could heat up today.

Senators getting calls on Namestnikov

It wouldn’t be a surprise if he isn’t moved by Monday’s deadline.

Senators did talk contract with DeMelo before trading him

Pierre LeBrun: The Senators did have contract extension talks with Dylan DeMelo‘s agent Brian MacDonald before they traded him.

The Senators never made an official contract offer to the pending UFA.

Pierre LeBrun: Would guess that term on his next deal would be really important for DeMelo, which is probably something that turned the Senators off from making him an offer.

Jets signing DeMelo is an option

Scott Billeck: Acquiring defenseman Dylan DeMelo for a third-round pick is a good deal and if they are able to re-sign him, which there could be an opportunity to, the deal looks even better.

Darren Dreger: The Winnipeg Jets could still be looking for another defenseman even after acquiring DeMelo.

GM Kevin Cheveldayoff is also looking at forwards, though the price could be too high for that to happen.