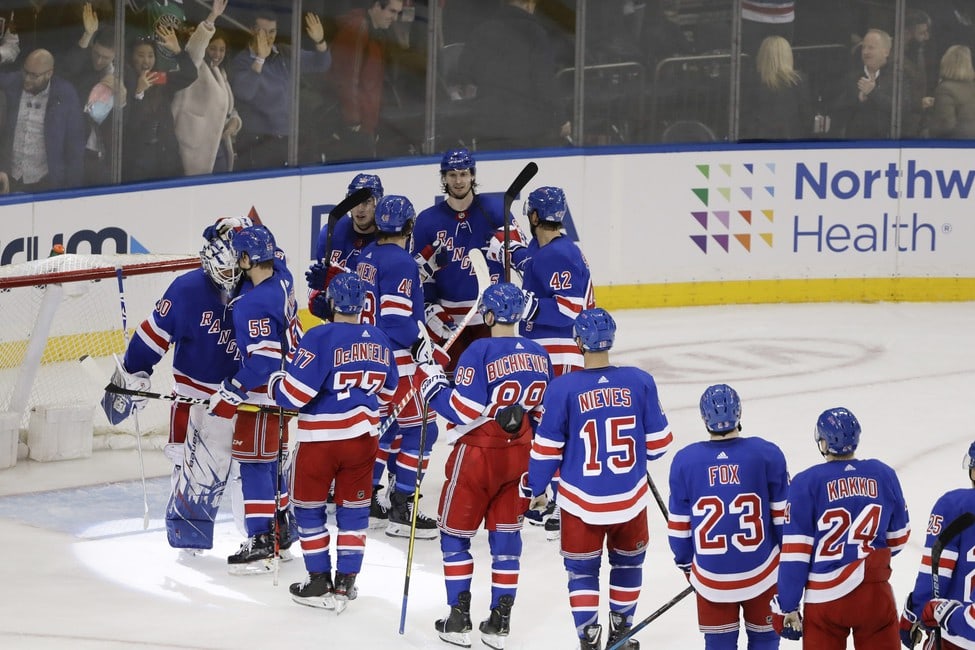 The New York Rangers entered Sunday’s contest versus the Los Angeles Kings feeling a little down in the dumps. Just two days earlier, they squared off against the Buffalo Sabres and had pretty high expectations to win that game and creep up the standings. Unfortunately, they underestimated their opponents and the Sabres ended up defeating the Blueshirts 3-2 in regulation. It put a serious dent in their already fading playoff hopes with a little under two months to go in the regular season.

The Kings were another weak opponent for the Rangers, so they knew they could not fall into the same trap as they had a couple of days earlier. Let’s quickly dip our toes in and get a feel for what exactly transpired during Sunday night’s action at Madison Square Garden.

There was quite a lot of buzz around Igor Shesterkin’s abilities even before he made it to the NHL level. The Rangers drafted Shesterkin back in 2014 with the hopes he would one day be the heir to King Henrik Lundqvist’s throne. He spent the first six seasons in the KHL where he dominated numerous facets of goaltending position. He finished his time in Russia with a jaw-dropping 1.68 goals-against average and an incredible .935 save percentage. He also recorded the third-most shutouts in KHL history (10) and was a part of numerous medal-winning teams during his tenure as well.

He then signed a contract with the Rangers in May 2019 and began playing for the Hartford Wolf Pack later that Fall. He once again dominated for the Rangers’ minor league club compiling a 17-4-3 record with a 1.90 goals-against average and .934 save percentage.

By early January, the Rangers were having some issues with their goalie situation. Lundqvist did not look like his old self and hasn’t for quite some time. Alexandar Georgiev was playing alright, but even he was experiencing some bumps in the road more often than the organization would have liked. On Jan. 7, the Rangers finally made the move to call Shesterkin up from Hartford and have him make his NHL debut against the Colorado Avalanche.

He started in five games prior to Sunday’s contest and only lost one time while maintaining a 2.61 goals-against average and .922 save percentage. The Rangers were hoping for some more magic by Shesterkin and help give them two points they desperately needed. He would not fail and nearly stonewalled the Kings as he stopped 42 of 43 shots faced in a 4-1 victory.

Tyler Toffoli, in particular, must’ve been having fits all evening as he had several high-quality opportunities to bury one past the rookie goaltender. One moment that stood out to me occurred with just under six minutes remaining in the second period. At the time, the Rangers were up 1-0 and trying to not give the Kings any sort of life. It started when forward Alex Iafallo carried the puck through the neutral zone on the left-wing and into Rangers territory.

Rangers’ rearguard Marc Staal was skating backward trying to defend Iafallo from making a pass over the middle to one of his teammates. The Kings forward continued skating and swooped in around the net as the aging Staal struggled to keep up. Iafallo came out from the other side behind the cage and he sent a pass over to Toffoli in the high-slot. The one-time Stanley Cup champ received the pass with ease and ripped a shot towards the net. As he usually has been in his last five starts, Shesterkin was up to the task as he kicked out his right pad and made a timely save.

There were similar scenarios that occurred between Shesterkin and Toffoli throughout the duration of the contest. Shesterkin always got the better of Toffoli in this one which is pretty impressive for a young rookie to do against a seasoned veteran.

All in all, it was another great performance from the young goalie as he continues to grow into his own. The future is brimming with lots of hope for Shesterkin as the Rangers are depending on him to be the one who takes over for Lundqvist once he calls it quits. Coach David Quinn appears to be interested in riding the hot-hand in net, hence why he decided to roll with Shesterkin once again for Tuesday’s match against the Winnipeg Jets.

Artemi Panarin is the cornerstone piece to the Rangers’ offense. There’s no denying it and I’m sure no one would disagree with that notion. He was a great acquisition made in the summer as the Rangers were looking to add an elite talent to lead the young core of forwards as they develop.

In just 53 games while playing in the Big Apple, the “Bread Man” has compiled an impressive 28 goals and 45 assists. His 73 points currently rank him just within the top-five among all players in the league. Only Leon Draisaitl, Connor McDavid, David Pastrnak, and Nathan MacKinnon have more points than Panarin. That’s not bad company to be around if you ask me.

Panarin entered Sunday’s contest on a bit of a goal drought. He had not scored in the month of February yet as his last goal occurred back on Jan. 31 against the lowly Detroit Red Wings. He was certainly due for a goal and the struggling Kings were the perfect target for such an occasion.

At first, it appeared that Panarin’s goalless streak was going to reach five games as the contest was winding under three minutes in regulation time. Then finally, he broke through and provided his team with an important two-goal cushion. Before the goal happened, the Rangers found themselves up 2-1 and the Kings were spending some time in the New York zone. They were applying pressure to tie the game up at two and possibly force overtime or worse.

Adrian Kempe was at the Rangers blue line when he decided to flip a pass over to Dustin Brown in the slot area. Ryan Strome managed to block the pass and it shot up in the air towards Jesper Fast who batted it down. As the puck descended, Panarin swatted it with his stick to Strome who managed to carry it out of their zone. Panarin followed him up the wing and a two-on-one developed shortly after.

Both Strome and Panarin entered Los Angeles territory as two more Kings players were quickly rushing back to help their lone defenseman. Strome sensed the pressure and snared a shot towards Jonathan Quick. The Kings netminder made the save but gave up a huge rebound on the left side where Panarin was. He wasted no time in burying the puck in the yawning cage and made it a 3-1 game in favor of the Rangers.

Panarin had once again stepped up in a major way and essentially put the final nail on the coffin as they defeated the Kings 4-1 by the conclusion of the game. His talent and ability to handle the puck has been quite a treat for us all. We are very lucky to have a talent like this on our side for once and hopefully, the Rangers will continue to provide him with the pieces necessary to be a more competitive team in the near future.

The Rangers have now improved their record to 27-23-4 and they have 58 points at the moment. They are 11 points back of the Philadelphia Flyers for the final playoff spot. Yes, the window of opportunity is quickly slipping shut on their chances to qualify for the playoffs this year, but the expectations entering 2019-20 weren’t particularly high considering the circumstances.

In my opinion, I feel the Rangers have done a very good job up to this point with their rebuild process. They are much further along than I had anticipated and it looks like it will continue to get better. It has certainly been a pleasant surprise but there is still plenty of work that needs to be done. The Rangers will have to continue building up their defense and get their young offensive weapons like Kaapo Kakko, Brett Howden, and Filip Chytil to continue to develop.

The Rangers will now prepare for a tough matchup against the Winnipeg Jets on the road. It will be interesting to see how they respond to this test.