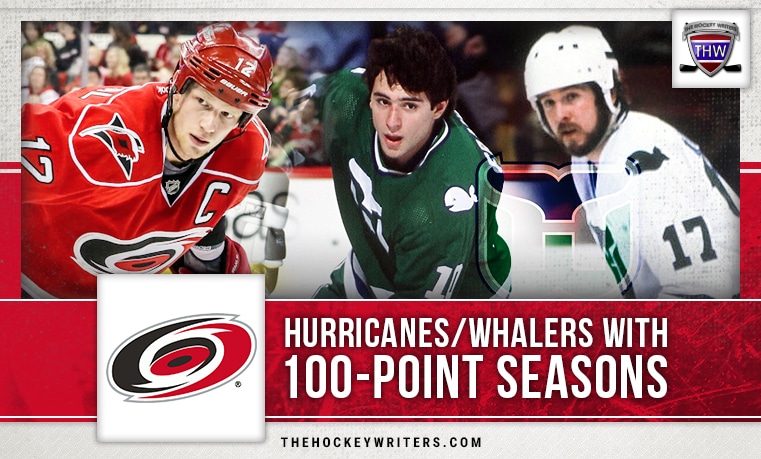 The Hartford Whalers/Carolina Hurricanes franchise has had its fair share of iconic moments over its 40-year history. They’ve gone through plenty of highs and lows – a relocation, a Stanley Cup victory, and a few too many elongated stretches of mediocrity.

Related: The WHA – A Look Back at the Upstart League

The NHL adopted the Whalers in 1979, who then became the Hurricanes in 1997, and through those four decades, dozens of outstanding people have represented the franchise. Only four, however, have achieved the esteemed title of 100-point scorer – and only one has done it with the modern-age Hurricanes.

Blaine Stoughton is one of the lesser talked about Whalers stars today, but many of his achievements still stand atop the history books. He was a huge part of Hartford’s inaugural year in 1979-80, leading the team with 56 goals and chipping in 44 assists to reach the 100-point plateau. Stoughton is the only 50-goal scorer in Hurricanes/Whalers history, and did so on two separate occasions, in 1979-80 and 1981-82.

That first year in Whalers history featured a star-studded cast of legends like Dave Keon, Bobby Hull, Gordie Howe, and his sons Mark and Marty Howe. It was an exciting year that kickstarted hockey in Hartford with a bang. Even though the team wasn’t spectacular – they boasted a sluggish 27-34-19 record – they still made the playoffs, which the Whalers as a whole didn’t accomplish again until 1985-86.

Overall, Stoughton totaled 377 points in just 357 games spanning five seasons with the Whalers, and his 219 goals rank fourth in franchise history. He wasn’t the only player to score 100 points in 1979-80, however. Stoughton was a winger with a primary prowess for goal scoring, but nobody does it all alone.

Mike Rogers Leads the Whalers in Their Infancy

With over 100 points in each of the Whalers’ first two seasons in Hartford, center Mike Rogers is the only player on this list to see his name appear more than once. Rogers scored a franchise-record 105 points in back-to-back seasons for the Whalers in 1979-80 and 1980-81 as a teammate and often linemate of Stoughton.

Rogers could do it all – he was a strong two-way center with the ability to score goals and set up his teammates. Both 100-point seasons in Hartford saw him reach the 40-goal mark, which he was never able to replicate again in his career.

Rogers didn’t play in the NHL until he was 24 years old, having started the first six seasons of his career in the WHA. After the 1979 merger between the WHA and NHL, Rogers joined the team in Hartford, where the Whalers relied heavily on his offense for the two years he repped the Whale crest.

Following his second year in Hartford, where he served as captain, he was abruptly traded to the New York Rangers. The Hurricanes had just selected Ron Francis fourth overall in the 1981 Draft and made the decision to move on from Rogers, who was just beginning to settle into Hartford.

As a new member of the Rangers, Rogers recorded a third-straight 100-point season in 1981-82, making him one of only four players in history to earn 100 points in each of his first three NHL seasons. The others? Wayne Gretzky, Mario Lemieux, and Peter Stastny.

If Francis’ massive point totals aren’t indicative enough of his impact on the Hurricanes/Whalers franchise, his No. 10 jersey hanging from the rafters at PNC Arena certainly is.

Francis is the franchise leader in nearly every category, including goals, assists, points, and games played. With 1,175 points in 1,186 games with the Hurricanes/Whalers, Francis’ records are going to be nearly impossible to break for future challengers. But despite his dominance, he only ever hit the 100-point mark once in his 16 seasons with the franchise.

With 32 goals and 69 assists for 101 points in 1989-90, Francis set a new career-high that he only ever topped once – in 1995-96 with the Pittsburgh Penguins (119). Unfortunately for him and the Whalers, the 1989-90 season wasn’t much different than the others in that era, despite Francis’ efforts. The Whalers were a perennial .500 team that never seemed to make much of a splash in the postseason, even with seven straight playoff appearances from 1986 to 1992.

Francis’ 10 seasons with the Whalers to start his career were capped off by six seasons with the Hurricanes near the end, with a stop in Pittsburgh in between and a short 12-game stint in 2004 with the Toronto Maple Leafs. Although he doesn’t hold the record for most points in a single season by a Whaler/Hurricane, his overall records and contributions to the game may never be surpassed.

Fresh off the canceled 2004-05 NHL season and on the heels of Francis’ retirement, a 20-year-old kid from Thunder Bay, Ontario was ready to make his mark with the Hurricanes and establish himself as a true superstar.

The 2005-06 season was historic for the Hurricanes for obvious reasons, but it was significant in an even greater way for Eric Staal. He exceeded all expectations as a young player coming into a veteran group, becoming the fourth, and the most recent, player to score a 100-point season.

Staal was drafted second overall in 2003 by the Hurricanes, one pick behind Penguins draft choice Marc-Andre Fleury. The 6-foot-4 center broke straight into the league the following season where he played alongside Francis in a generally poor year for the ‘Canes. They won just 28 games, missing the playoffs for the second straight year.

With 11 goals and 20 assists in 81 games, Staal was slow to get going offensively, but a season with the AHL’s Lowell Lock Monsters during the 2004-05 NHL lockout was just what he needed to gain his confidence. He returned for the 2005-06 season in which the Hurricanes won the Stanley Cup, burying 45 goals and adding 55 assists along the way, making him the first player since Francis to hit the 100-point plateau. He did it by scoring his 100th point on an assist in the second-to-last game of the season.

Staal led the Hurricanes through 10 more seasons as they unsuccessfully attempted to replicate their success. Carolina only made the playoffs one more time in Staal’s time with the Hurricanes, but it was through no fault of his own. Staal clicked with six more seasons of 70-plus points until he was eventually traded to the New York Rangers at the 2016 trade deadline.

Staal, 35, is still playing today with the Minnesota Wild. He scored his 1,000th career point earlier this season against the Chicago Blackhawks.

With their Stanley Cup victory and last 100-point season long behind them, the Hurricanes have a few players who could soon be on the cusp of reaching that achievement. In 2018-19, Sebastian Aho scored 83 points, the highest total by a Hurricanes player since Ray Whitney’s 83 points in 2006-07. Teuvo Teravainen, who had 76 points in 2018-19, is another young Carolina forward who is improving every year and is currently on pace to surpass his career high.

While Teravainen has been a steady presence with the Hurricanes this season, Aho has become more of a goal scorer. He’s producing at about the same point-per-game pace, which would have him finish just shy of his totals last year, but he’s up to 31 goals on the season, which is a career high and currently ranks him seventh in the league.

The player to really watch however, is Andrei Svechnikov. Svechnikov has been one of Carolina’s top scoring threats this year and still has his entire NHL career ahead of him. He’s only going to get better each season until he fully matures, and if his near-point-per-game numbers as a teenager tell us anything, it’s that Svechnikov may one day find himself part of the Hurricanes’ history books.