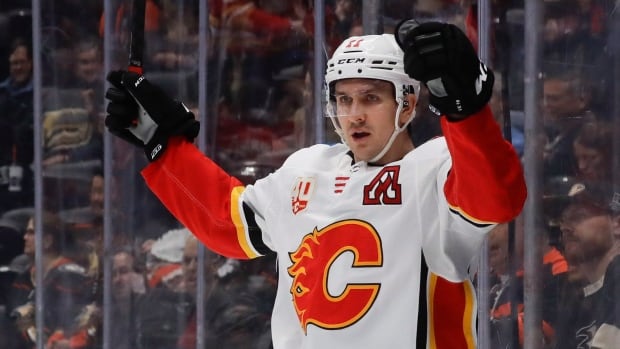 Mikael Backlund and Mark Jankowski scored two goals apiece, and Cam Talbot made 44 saves for his 21st career shutout in the Flames’ 6-0 victory over the Anaheim Ducks on Thursday night.

The Ducks gave up four goals in the first period of their first game since since their game against St. Louis was called off Tuesday night when Blues defenceman Jay Bouwmeester collapsed on the Honda Center bench during the first period.

Talbot was superb in his first shutout of the season and his first victory since Jan. 11, making 18 saves in the second period alone.

Elias Lindholm, Oliver Kylington, Backlund and Jankowski all scored for Calgary during that one-sided opening period. Lindholm extended his scoring streak to nine games, one shy of his career high, with his 25th goal.

John Gibson stopped 12 shots in Anaheim’s awful first period before Ryan Miller replaced him to start the second. The Ducks’ season-best streak of five straight games with a point ended with just their second regulation loss in eight games.

Backlund got a short-handed goal in the second period for his 14th career multi-goal game, his first since March 10.

Calgary finished its four-game road trip with three wins in the first of two games between the Pacific Division rivals in five days.

Lindholm opened the scoring moments after a power play expired in the first period, finishing a scramble near the Ducks’ net by stuffing the puck past Gibson’s short side.

Backlund extended his scoring streak to five games by converting a pass from Andrew Mangiapane. Just 1:29 later, Kylington beat Gibson high to the glove side for the 22-year-old Swede’s second goal of the season and fifth of his NHL career.

Jankowski then put an unobstructed shot past Gibson’s glove while skating up the middle during an odd-man rush 55 seconds before the first period ended.

Backlund got his short-handed goal late in the second, and Jankowski added another goal off his own rebound in the third. He has scored five goals in his last seven games after failing to score in his first 38 this season.