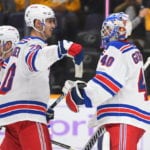 If the Rangers are able to extend Chris Kreider, other moves may need to happen

TSN: Bob McKenzie said last night that there have been some contract extension talks between the New York Rangers and pending UFA forward Chris Kreider. There is some optimism that a deal could be worked out, but it might mean they’d need to make some counter moves at the deadline or offseason.

“I think optimism is too strong of a word. Is it possible? Sure. But, it’s also going to be difficult for the Rangers to meet what Chris Kreider is looking for. So, what we got is duel tracks. You’ve got the contract negotiations going on over here. You’ve got trade talk going over here and it still could very much go either way.”

If the Rangers were to re-sign Kreider, at the trade deadline or in the offseason they may need to move trade combination Pavel Buchnevich, Ryan Strome and Anthony DeAngelo.

TSN: Bob McKenzie said that New York Rangers will continue to take calls on goaltender Alexandar Georgiev. The offseason may be the best time for the Rangers to figure out their three goaltender situation.

“I’m curious to see what the reaction is from Henrik Lundqvist. If he goes on a big stretch here between now and the deadline, is he content to stay there as a No. 2 or a No. 3. He’s got a no-move clause. Rangers don’t plan on trading him, obviously.”

Hurricanes would trade a first if…

TSN: Pierre LeBrun said that the Carolina Hurricanes are willing to trade a high draft pick if it means they’d get a top-four defenseman with term.

They have kicked tires on pending UFAs Brenden Dillon and Sami Vatanen.

Matt Dumba has term left and he’s another player they’ve kicked tires on.