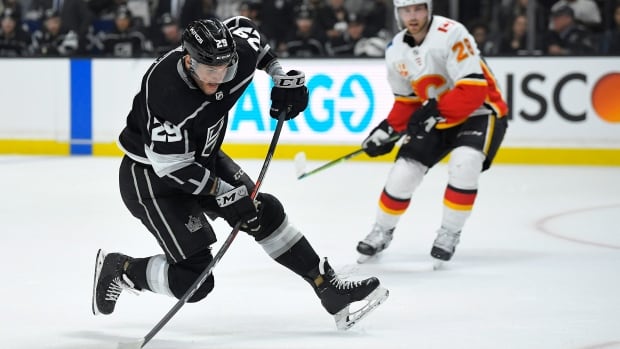 Tyler Toffoli and Austin Wagner scored 39 seconds apart in the second period to give Los Angeles the lead, and the Kings went on to beat the Calgary Flames 5-3 on Wednesday night.

Kurtis MacDermid, Jeff Carter and Sean Walker also scored to help the Kings end a five-game losing streak. Calvin Petersen stopped 35 shots to get his first win of the season in his second start.

Toffoli tied the score 1-1 off a rebound for his 15th of the season just 44 seconds after Backlund had put the Flames ahead.

Wagner then gave Los Angeles the lead for good with his fourth on a breakaway with 7 minutes to go in the middle period.

MacDermid scored on a wrister that beat Rittich top shelf to extend the Kings lead to 3-1 at 1:42 of the third. It was the defenceman’s third.

Lindholm scored at 3:25 to pull the Flames within one goal.

The Kings had a huge penalty kill midway through the final period, with Calgary on a 5-on-3 power play for 1:03 thanks to back-to-back tripping penalties by Drew Doughty and Iafallo. Carter scored from the slot for his 17th to give the Kings a two-goal lead again with 4:48 remaining.

WATCH | The evolution of the lacrosse goal:

We first saw it done by Mike Legg in 1996 at the University of Michigan. It took 24 years to be done in the NHL, but now the lacrosse goal has happened three times this season. How’d the unique move reach hockey’s highest level? 2:43

With Rittich pulled for an extra skater, Lindholm got his second of the night and 24th of the season to pull Calgary to 4-3 with 3:05 remaining.

Backlund scored to put Calgary on the board first in the second period after a mistake by Petersen. The goalie went behind the net to play the puck, but the it took an unexpected bounce and in trying to clear it, the puck went right to Keith Tkachuck, who passed to Backlund for the goal.

The Kings — last in the Pacific Division — played a strong first period and outshot the Flames 13-8 in a scoreless first period.