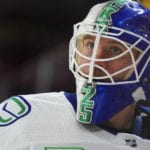 Jim Matheson: Edmonton Oilers GM Ken Holland would trade the rights to Jesse Puljujarvi to the Detroit Red Wings for Andreas Athanasiou. The Red Wings would likely want a draft pick as well. A second rounder would be too much, but a fourth or higher could be okay.

Jim Matheson: One concern for the Oilers GM Ken Holland would be that they are already at 48 contracts. Any trades may have to be player in, player out.

Forward Jujhar Khaira could be someone they’d move. There may be some teams interested in his size.

“Certainly there’s contract talks going on now,” said Sportsnet’s Chris Johnston during the Headlines segment on Hockey Night in Canada. “This is a tough one to get a read on. I don’t think Jacob Markstrom wants this to play out too much publicly. Jim Benning was on today with Dan Murphy on the Sportsnet broadcast and said they wanted to get something done.”

“Word was going around this week that there was a two-year offer from the Canucks to Jacob Markstrom, a raise on what he is making now. That is not confirmed from anyone yet. But it does seem as though, behind the scenes, they are trying to see if there is a fit.”

Wild will wait as long as they can

Michael Russo of The Athletic: The rumor mill continues to follow the Minnesota Wild – from Matt Dumba to Jonas Brodin to Jason Zucker to Marcus Foligno.

“(Guerin’s) been frank with us that he’s going to wait as long as he can, but we’ve got to play better and we’ve got to show him that this is the group,” Dumba said. “Yeah, we’ve got to be better.”