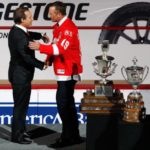 Helene St. James of the Detroit Free Press (mailbag):  For a team that may not win 20 games this season, Detroit has many questions. However, this year was all about development and not wins and losses. Filip Zadina and Dylan Larkin starting to look like what they were expected have helped.

There may be a window to bring up some of Grand Rapids’ best players. However, keeping them down there while in a playoff hunt may be even more beneficial. If Yzerman unloads Mike Green before the trade deadline then that opens up spots for some younger Griffins. Moritz Seder, Joe Veleno, and Michael Rasmussen could all make appearances.

Helene St. James of the Detroit Free Press (mailbag):  It makes sense that Glendening is a valuable trade chip. He scored 10+ goals in three seasons since 2014-15. Glendening plays a responsible two-way forward role very well. He carries a $1.8 million AAV through the 2020-21 season. Players with expiring contracts include Mike Green, Jimmy Howard, and Trevor Daley. That trio just does not hold as much value.

Andreas Athanasiou lost a lot of value due to injury. As for Glendening, the problem is if Steve Yzerman does not get a solid offer then what’s the point? Detroit taking less for their lesser players may become the reality.

Who Stays and Who Goes from the Detroit Red Wings?

Ansar Khan of MLive Detroit:  Steve Yzerman’s biggest problem is that Detroit’s tradeable commodities are struggling. Then others are hurt or playing hurt perhaps. It is a problem that has caused Yzerman to re-evaluate. Mike Green may change teams but that could wind up resulting in acquiring a mid-round pick.

After that, it is back to evaluating for Steve Yzerman. Players like Veleno and Seider will get nine-game looks. Evgeni Svechnikov likely sees an extended look as his waiver-exempt status expires next year. Yzerman needs to watch the Russian in a top-six role to decide on him.

Finally, there is Jeff Blashill. Will his option be renewed for 2020-21? Gerard Gallant lurks out there and Yzerman has a connection. Blashill’s time may be up no matter what happens the rest of the season.