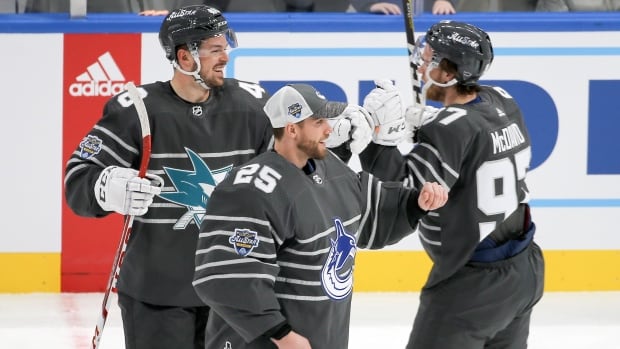 Some of the key figures in what’s once again the NHL’s most heated rivalry briefly put their differences aside at the league’s all-star game.

It’ll soon be back to regularly scheduled programming.

Tomas Hertl scored the winner — his fifth goal of the night — as the Pacific Division defeated their Atlantic counterparts 5-4 to win the 3-on-3 showcase tournament Saturday.

The victorious squad featured Matthew Tkachuk of the Calgary Flames, as well as Connor McDavid and Leon Draisaitl of the Edmonton Oilers — combatants on teams embroiled in a war of words over the last two weeks.

The Oilers and Flames have been at odds since Tkachuk levelled Zack Kassian with two huge hits in a recent testy matchup. Kassian eventually had enough and mauled Calgary’s winger/chief antagonist to earn himself a two-game suspension.

“Nothing added to the fuel to the rivalry this weekend,” Tkachuk said in the winning locker room Saturday. “This was just a bunch of really good hockey players coming and trying to put on a show.”

Tkachuk actually set up Draisaitl for a goal with a slick no-look pass in the Pacific’s 10-5 triumph over the Central Division in the semifinal, but skated straight to the bench instead of celebrating.

“Just wanted to get off the ice,” Tkachuk said. “I was out there for a while.”

Draisaitl said after the latest instalment of the Battle of Alberta that he would “probably get off the ice” himself if he was ever out there with Tkachuk at the all-star game.

Draisaitl said something to Tkachuk after the goal, but the former insisted there was nothing malicious in the exchange.

Battle of Alberta to resume Wednesday

Tied in the standings with 57 points and in a battle for playoff positioning, the Flames and Oilers will renew regular-season hostilities Wednesday in Edmonton and then again three nights later in Calgary.

“It was fine,” Flames captain Mark Giordano said of sharing space with a pair of Oilers. “This is away from the regular season. It’s a different atmosphere. I thought both sides handled themselves really well this weekend. I’m sure next week when we get back to the Battle of Alberta there’ll be that fire.”

“I know it’s a big battle between us,” Calgary goalie David Rittich added. “We just want to have fun. We’re doing this for fans, for kids.”

McDavid, the NHL’s leading scorer, finished with a combined four assists on the night.

“I definitely didn’t feel my best out there, but it’s all for fun,” he said. “We have a couple days to get ready for the real stuff.”

Boston Bruins winger David Pastrnak took home the most valuable player award after the NHL’s leading goal-scorer found the back of the net once and added an assist in the final for the Atlantic. He also recorded four points (three goals, one assist) in his division’s 9-5 semifinal victory over the Metropolitan inside Enterprise Center.

Hertl, who showed his personality by wearing a Justin Bieber mask during one of Friday’s events at the skills competition, scored the winner with 2:36 left when the San Jose Sharks centre beat Tampa Bay Lightning goalie Andrei Vasilevskiy off a setup from Draisaitl and McDavid.

Vancouver Canucks centre Elias Pettersson scored two goals in the final as the Pacific battled back from a 3-1 deficit to grab the $1-million US prize at the home of the defending Stanley Cup champion St. Louis Blues.

“I’m not going to take this for granted,” said Pettersson, who tried and failed on his attempt at what would have been a jaw-dropping lacrosse-style goal. “It’s awesome to be here. I remember I grew up watching this. Now I’m here sharing this with everybody.”

The Pacific took the all-star crown in both 2016 and 2018, while the Metropolitan captured the title in 2017 and again last year.

Tkachuk, who grew up in St. Louis when his father Keith played for the Blues, suited up against younger brother Brady, a winger with the Ottawa Senators, in the final.

He actually stole the puck from his sibling to set up one of Pettersson’s goals.

“It’s been a lot of fun,” Matthew Tkachuk said. “I was humbled and honoured to be here.”