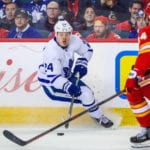 Calgary Flames general manager Brad Treliving kicked off 2020 by shedding salary. In shipping winger Michael Frolik to the Buffalo Sabres for a fourth-round pick in the 2020 NHL Draft, Treliving freed up an additional $4.3-million.

Cap Friendly indicates the Flames have over $4.7 million in cap room. Treliving said he’ll invest it leading up to the Feb. 24 trade deadline.

The Athletic’s Scott Cruickshank suggests Treliving could pursue a big, top-six forward, preferably a right-winger.  One assumes he might target a pending unrestricted free agent. However, Sportsnet’s Elliotte Friedman reported the Flames management isn’t interested in rental players, preferring instead those with term remaining on their contracts.

Here’s a look at five players who could be on the Flames’ radar in the coming weeks.

Recent speculation indicates several clubs have expressed some interest in Saad. Among them are reportedly the Flames’ biggest rival, the Edmonton Oilers. The 26-year-old winger’s $6-million annual salary through 2020-21 could prove too expensive for the Oilers to take on.

If the Blackhawks move Saad, they could seek a good young defenseman in return. Their asking price from the Flames could involve Rasmus Andersson. The Flames would also have to ship out another salaried player or ask the Hawks to pick up part of Saad’s cap hit.

Toffoli is an unrestricted free agent this summer, but the Flames could set their sights on him if unable to find a player with term on his contract. They could also attempt a trade-and-sign scenario.

The 27-year-old is a versatile two-way forward who could be a good second-line fit. With the Kings in rebuilding mode, the return could include a decent draft pick or a good young prospect.

A swift-skating forward who can play center or on the wing. The 25-year-old Athanasiou could benefit from a change of scenery. After tallying a career-high 30 goals and 54 points last season, he’s managed just five goals and 19 points in 36 games for the sad-sack Red Wings.

Athanasiou is a restricted free agent with arbitration rights this summer. He could shine seeing top-six minutes on a better roster like Calgary’s. Like the Blackhawks, the Wings need good young defensive depth and could ask for Andersson. Perhaps the Flames could counter with Oliver Kylington.

Signed last summer to a three-year deal worth an annual average value of $3.2 million, the 23-year-old Kapanen would fit easily within the Flames’ cap constraints. He possesses good speed and is on pace for another 20-goal, 44-point performance.

The Leafs’ biggest need is for a reliable backup goaltender, but the Flames have none to spare. They could also use additional blueline depth. T.J. Brodie and Travis Hamonic were rumored to be available earlier this season. The Flames might dangle one of those for a younger, affordable winger.

Having reached a career-high 56-points last season, Labanc bet on himself by inking a one-year, $1-million contract hoping it might translate into a more lucrative deal this summer. With 21 points in 44 games, the 24-year-old winger is well below his 2018-19 production.

With the Sharks in danger of falling out of playoff contention, GM Doug Wilson could become a seller by the trade deadline. It might be worthwhile for the Flames to explore Labanc’s trade status.