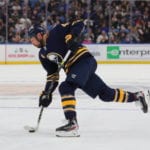 The NHL is under its annual roster freeze until 12:01 am ET on Dec. 28. After that, teams will be able to engage in trade activity.

Despite the recent Taylor Hall trade, most deals involving significant players tend to take place in the month leading up to the annual late February trade deadline. However, several players who’ve popped up in the trade rumor mill before the freeze could be on the move within the next few weeks.

Following the Buffalo Sabres’ 4-3 win over the Nashville Predators on Dec. 12, reports emerged that Bogosian requested a trade. He was said to be unhappy over being a healthy scratch from that contest. He was also scratched from their next three games.

The 29-year-old defenseman declined to comment, preferring to keep discussions with management in-house. Slated to become an unrestricted free agent in July, the oft-injured Bogosian no longer fits into the Sabres’ long-term plans.

On Dec. 5, The Athletic’s Josh Yohe cited Penguins general manager Jim Rutherford suggesting the 25-year-old winger could be the odd man out once all their forwards are healthy. Sportsnet’s Elliotte Friedman speculated the Buffalo Sabres had looked into Galchenyuk. He also said there wasn’t any truth to speculation the Ottawa Senators were interested.

Despite his struggles with the Penguins, Galchenyuk is a former 30-goal scorer. A club desperate for scoring depth could consider him a worthwhile playoff rental gamble, especially if Rutherford’s willing to pick up part of his $4.9-million cap hit.

The decline in Athanasiou’s production this season is a contributing factor in the Wings’ miserable play. Having tallied a career-high 30 goals and 54 points last season, the 25-year-old center’s managed just 17 points in 33 contests. In a recent mailbag segment, MLive.com’s Ansar Khan suggested he could benefit from a change of scenery.

Athanasiou is a restricted free agent with arbitration rights. Under previous Wings GM Ken Holland, he staged an ill-advised holdout coming out of his entry-level deal. If current GM Steve Yzerman believes Athanasiou’s contract negotiations will get difficult he could put him on the trade block.

With the Blackhawks playoff hopes fading, GM Stan Bowman might get an early start on his roster spring cleaning by shipping out some pending UFAs. Gustafsson could be the first one on the block.

Despite a career-high 60-point effort last season, the 27-year-old blueliner has returned to earth with just 13 points in 34 games. Recent media trade chatter linked him to the Montreal Canadiens and Vegas Golden Knights.

Earlier this month, Sportsnet’s Elliotte Friedman mentioned Wood was on the trade block. He’s signed through 2021-22 with an affordable $2.75-million annual cap hit.

Wood, 24, has some power-forward potential. With the Devils shipping out Taylor Hall last week, they could find a new NHL home for the 24-year-old winger.