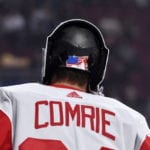 Ken Weibe: The Winnipeg Jets would likely have some interest in claiming Comrie off waivers. They could use some more organizational depth in net.

Since Comrie was traded after he claimed off waivers the first time by the Arizona Coyotes, if the Jets were to claim him he would not be eligible to be immediately sent to the AHL. (The Jets had put him on waivers earlier this season).

Joe Haggerty: The Boston Bruins had been interested in Ilya Kovalchuk before he signed with the Los Angeles Kings.

Since he’d be a cheap free agent signing now, why wouldn’t the Bruins be interested in signing him?

Pierre LeBrun: There were about 20 teams that were interested in Ilya Mikheyev before he signed with the Toronto Maple Leafs.

The Leafs were his top choice since he first met with them back in August of 2018.

The Chicago Blackhawks and Vegas Golden Knights were two teams that tried pretty hard to sign him.

Mikheyev will be a RFA after this season and given the Maple Leafs salary cap situation, arbitration may be the best course for him.