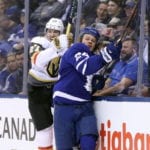 Maple Leafs will have to depth decisions/options next month

Trevor Moore is close to returning and it may not be easy to crack the top-nine. Then there is Andreas Johnsson, who will create some tough decisions for management when he returns.

Dmytro Timashov, Trevor Moore and Frederik Gauthier all require waivers and would likely get claimed.

If the Leafs keep the Mikheyev-Kerfoot-Engvall third line, one of Johnsson or Kasperi Kapanen would be on the fourth – not ideal at their salary.

Teams are keeping an eye on Kapanen and he could become a trade chip. Trading Kapanen for a defenseman makes some sense. The Oilers could use some speed on the wings. Could the Leafs and Oilers work something around Kapanen and Adam Larsson?

If the Leafs can create some cap flexibility, they could also use a backup goalie.

Some potential blue line targets for the Golden Knights

“There’s a lot of ground to cover between now and the 24th of February,” McCrimmon said, speaking of the NHL’s trade deadline. “We pay attention. We watch our own team. We assess our own strengths, weaknesses and what our needs might be. We evaluate the landscape, and if we have a need and something lines up then we make that trade. If we have a need and something is available that we can’t afford, then it doesn’t happen.”

The Golden Knights have been active the past two seasons leading up to the trade deadline. They believe they’ll have the cap space to do something this year as well.

Some potential blue line targets for the Golden Knights if they are looking for a defenseman.

Erik Gustafsson – Chicago Blackhawks – A pending UFA that only carries a $1.2 million cap hit. The Blackhawks could ask for a first-round pick, maybe more.

Marco Scandella – Buffalo Sabres – Source saying the Golden Knights have scouted the Sabres heavily this season already. He carries a $3.875 million cap hit – about $854,166 at the deadline.

Shayne Gostisbehere – Philadelphia Flyers – Has three years left on his deal at a $4.5 million cap hit. He’s been used by the Flyers on their third pairing and has been a healthy scratch as well.

Mike Green – Detroit Red Wings –  A 34-year old pending UFA. He may be the cheapest to acquire.