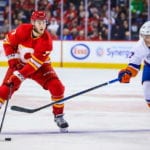 Can the New York Islanders fill their third-line hole?

Arthur Staple of The Athletic:  The Islanders could use some offensive depth as there is a clear hole on the third line. There are some options to fill it. Some are easy and some are not so easy. They could do everything from bringing up Oliver Wahlstrom, a future waiver claim, or perhaps an Andrew Ladd call up.

Also, there is always the trade market. However, JG Pageau carries too high of a price tag for New York to consider. Kyle Turris at $6 million AAV for four years is too steep but Mark Jankowski may come cheap from Calgary.

Then, there is Josh Ho-Sang and Taylor Hall but neither of those is remotely likely.

Would Lamoriello be willing to give up big assets for Hall for only four months as a rental, and would Shero be okay with trading within the division?

Detroit Red Wings and their RFA’s

Max Bultman of The Athletic:  Steve Yzerman has 11 listed RFA’s among his 47 signed players. That includes three he acquired (Robby Fabbri, Adam Erne, and Brendan Perlini). The top three — Andreas Athanasiou, Tyler Bertuzzi, and Anthony Mantha — are expected to come back barring a trade.

Robby Fabbri seems like the only “lock” among the next group. Ten points in his first 13 games help that cause. After that, players like Erne and Perlini may be looking elsewhere next year. Even Taro Hirose is a coin-flip at this point. After that, the rest of the organization’s RFA’s may have to find new locations in 2020-21.

San Jose Sharks and the number one goalie quest?

Curtis Pashelka of The Mercury News:  With any Taylor Hall trade to San Jose a moot point, focus shifts onto two fronts for San Jose. That is depth and goaltending. San Jose may not be able to adequately address goaltending until next summer which leads to improving even-strength play which has been woeful. Team defense, not just goaltending, has been a major issue.

What can Doug Wilson do? With limited cap space and market options, finding adequate two-way forwards may be an answer. Now, the question is can Wilson find them? Time will tell.