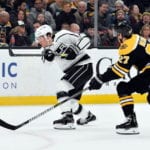 Greg Wyshynski: The Athletic reported that the 2021 NHL Winter Classic could be hosted by the Minnesota Wild at Target Field.

ESPN has learned that their opponents could be one of the Chicago Blackhawks, St. Louis Blues, Colorado Avalanche, or the Winnipeg Jets.

The Blackhawks have already appeared in six outdoor games.

Jimmy Murphy of Boston Hockey Now: It has been reported several times that the Boston Bruins have some interest in Los Angeles Kings forward Tyler Toffoli.

The Bruins interest has intensified, with Director of Player Development Jamie Langenbrunner scouting the Kings last Monday and Wednesday.

An assistant GM for another team said to not be surprised if the Bruins did their due diligence on New Jersey Devils Taylor Hall.

Would the Bruins be interested in signing Hall to an extension, especially with defenseman Torey Krug a pending UFA as well?

Toffoli is more likely than Hall. He carries a $4.6 million cap hit and they could use a right-winger for their second line.

A Galchenyk move may not be easy for the Penguins

Eric Engels of Sportsnet: Pittsburgh Penguins forward Alex Galchenyuk has the talent to be a top-six forward, but like what the Canadiens and Coyotes may have realized, he can be a liability in that role.

Coach Mike Sullivan said earlier this week that they are working with him to help try and establish his game. Penguins GM Jim Rutherford is trying to find a team interested in trading for him.

Galchenyuk is a pending UFA on a $4.9 million cap hit. One Eastern executive on Galchenyuk.

“Everyone knows what he is. Not sure who will want to acquire him. And more importantly, what will they want to give up to get him knowing all that?”

The Penguins would likely have to take back a contract or retain salary to move him.