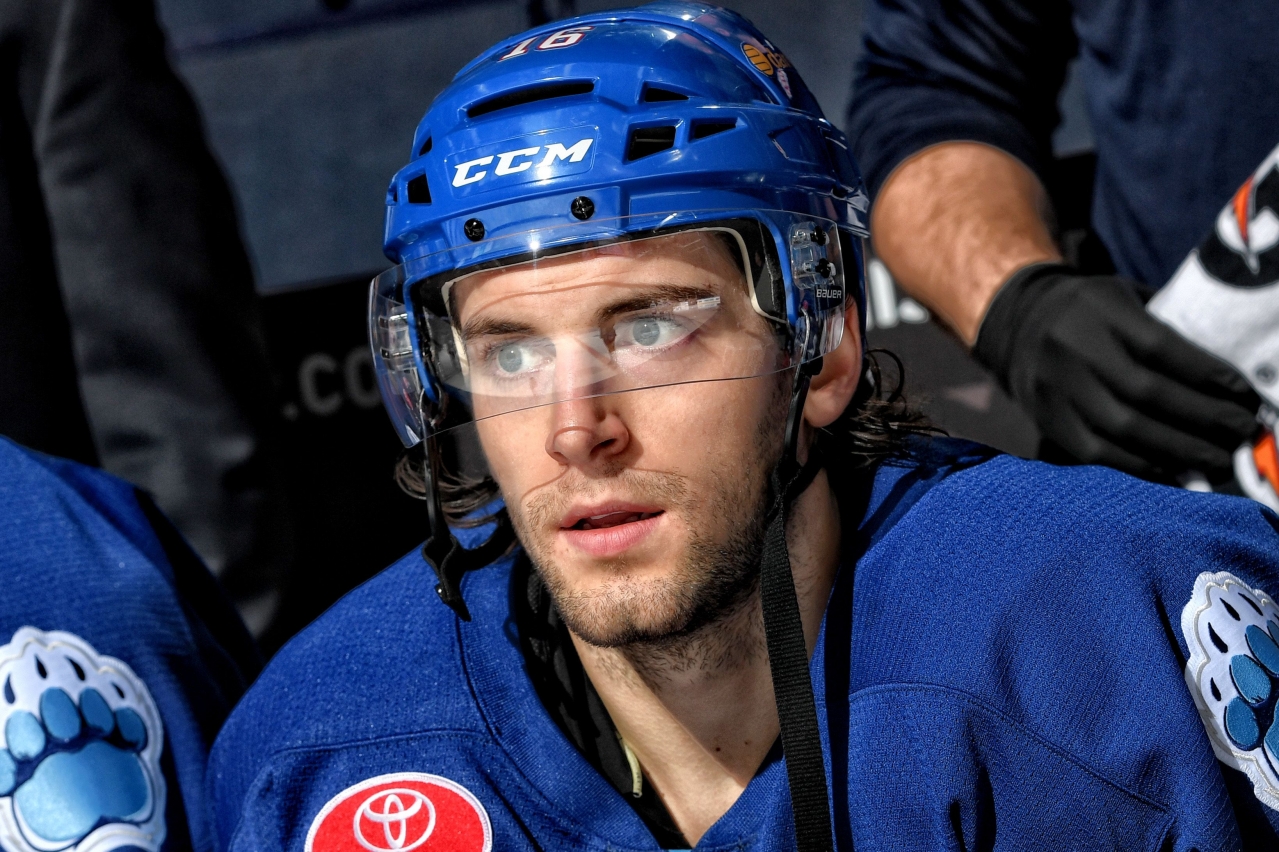 ROCHESTER – At first, Taylor Leier couldn’t comprehend what had happened to his right shoulder.

In the immediate aftermath of his freak training accident, Leier said he was in “complete shock.”

Later on, Leier, 25, said he would wake up during the night and wonder if he was dreaming about the injury.

“Like, there’s no way my shoulder’s actually hurt,” he would would say to himself.

Leier, who underwent surgery to repair a torn labrum, would ask himself why such an odd thing could happen to someone who dedicated himself to the game.

In eight seasons of major junior and pro hockey, the Americans’ winger had been a model of durability, never suffering a major injury.

But on May 18, Leier was stickhandling on roller blades at a tennis court near his home in Saskatoon, Sask., a routine he said he had done thousands of times.

When a rock got caught in his right blade, he put his hand down to break his fall. His shoulder popped out.

When Cindy Leier picked up the phone that day, she could barely understand her son’s frantic voice.

Despite the excruciating pain, Leier skated to his parents’ house two blocks away. His brother, Keaton, happened to be visiting from Atlanta and drove him to the emergency room.

When Cindy Leier and her husband, Tim, arrived at the hospital, their son was still in shock.

“He felt very frustrated and disappointed,” she said. “Like, he just thought, ‘Oh, my gosh, what have I done to myself here?’ ”

She said she wondered if he would ever play hockey again.

“I could see it in their eyes,” Leier said. “They were so upset for me.”

Almost seven months later, Leier is ready to play again. He plans to make his season debut Wednesday against the Wilkes-Barre/Scranton Penguins at Blue Cross Arena.

Leier has made 261 American Hockey League appearances over the last five years. Wednesday’s game will be among the most significant.

“He’s been through hell, to be honest,” Amerks general manager Randy Sexton said.

Sadness in his eyes

After four and a half seasons in the Philadelphia organization, the Flyers traded Leier to the Buffalo Sabres for winger Justin Bailey on Jan. 17, a swap of former second-round picks playing in the AHL.

Leier, who has played 55 NHL games, quickly acclimated to his new surroundings, scoring 12 goals and 23 points in 35 games with the Amerks.

“I loved the culture here and I was happy with how I played,” Leier said. “The thought in my mind was to re-sign here. But at the same time, I was an unrestricted free agent for the first time.”

Leier figured he would have suitors on the open market. Then he hurt his shoulder.

“I was pretty scared,” he said.

Leier said he was nervous that teams would say, “Come talk to us when you’re healthy.”

Following the injury, Tim Hodgson, Leier’s agent, called Sexton and explained what had happened. Sexton said the organization was still interested in Leier.

But to mitigate the risk, Leier, who spent all of the 2017-18 season in the NHL, was offered a one-year AHL contract.

On June 28, in addition to announcing Leier’s new deal, the Amerks said he had undergone “successful offseason surgery” and was expected to make a full recovery.

“They’ve been very supportive ever since that phone call,” Leier said. “They understand that I’m still young and stuff happens.”

Sexton said: “I really hope that we’re able to get him back on a two-way (contract) once he gets back and gets established.”

By late June, Leier was progressing in his recovery and knew he would be OK. Still, reaching that point took an emotional toll on him.

Leier said “vicious things” went through his head regarding his career.

“Hockey is his life, his passion,” said Nicolette Peloquin, Leier’s girlfriend. “It’s so much more than just a job for him.”

When his best friend, Nelson Nogier, a Manitoba Moose defenseman, visited him in the emergency room, Leier said he “could see the sadness in his eyes.”

“When he saw me, we just looked at each other, and my arm was hanging off the table,” Leier said.

Leier remembers all the significant dates.

He underwent major shoulder surgery June 3. He finally ditched his sling July 17. He skated for the first time Oct. 10. After receiving permission from Sexton, he reported to the Amerks on Oct. 21, earlier than expected.

Leier loves training so much he said it’s almost a second profession. For about five months, it was his life.

“I was like, ‘As soon as you’re allowed to do things, zero pity party, let’s go,’” he said of his rehab.

Leier, who lost 16 pounds, would work out for five hours, seven days a week.

“Literally, I had to rebuild my whole body back again,” he said.

But Leier couldn’t do much early during his recovery. Even going for a walk could be challenging.

He needed help from his family and Peloquin, who would visit from Rhode Island.

“It was 24-hour care for a couple weeks, that’s for sure,” Cindy Leier said.

Thinking about the critical support his parents and Peloquin provided made Leier break down crying.

“They were pretty reassuring I was mentally tough enough to get through it,” he said.

Leier said the long recovery “teaches you a little bit more about yourself.”

“In a way, it might be a blessing in disguise,” he said of the injury. “There’s not many things that can challenge you as much as this does.”