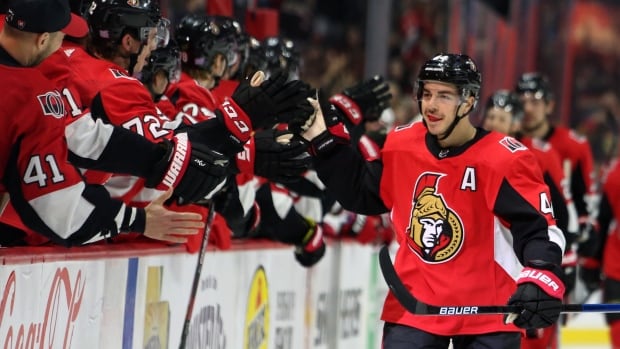 The Ottawa Senators may be in the midst of a rebuild, but that doesn’t mean the players aren’t enjoying themselves right now.

Filip Chlapik, Vladislav Namestnikov and Jean-Gabriel Pageau all scored in the first period and Anders Nilsson made 38 saves as Ottawa beat the Carolina Hurricanes 4-1 on Saturday.

The Senators (6-9-1) won their second straight game and third in their past four. Brady Tkachuk also scored in the third.

“I think we’ve just shown that we can beat some top teams in the league and that gives you confidence. Everyone is hungry and everyone wants to win and it’s really fun right now,” Chlapik said.

Vladislav Namestnikov and Jean-Gabriel Pageau set a franchise record with goals 4 seconds apart in the 1st period of the Senators 4-1 win over the Hurricanes. 0:58

Andrei Svechnikov had the lone goal for the Hurricanes (9-7-1), who lost their fourth straight game. James Reimer made 26 saves in the loss.

The Senators led 3-1 at the start of the third period and it stayed that way until Tkachuk scored at 15:53. Ottawa is now 5-4-0 on home ice this season.

“At the start [of the season] we were playing good hockey but not a full 60 minutes,” Tkachuk said. “Recently we’re starting to string them together and it’s just more of us working hard every single shift and playing our game which is fast and physical.

“We’re still learning but we’re certainly being rewarded with some bounces.”

Chlapik gave the Senators a 1-0 lead just shy of the halfway mark in the first when he deposited a rebound past Reimer with a backhand. Jonathan Davidson and J.C. Beaudin each collected an assist and their first NHL points on the goal.

Beaudin came close to getting his first NHL goal in the third period but, while his shot was able to beat Reimer, it didn’t beat the crossbar.

Already up 1-0 in the first, the Senators set a franchise record for fastest two goals when Namestnikov and Pageau scored four seconds apart late in the period to take a 3-0 lead.

Namestnikov had a Tyler Ennis shot hit him in front of the net and get past Reimer at 16:47. On the ensuing faceoff Pageau chased the puck down in the Carolina zone and beat Reimer from just inside the top of the face-off circle at 16:51.

“For me too, you want to stop pucks and you don’t want to let them in. It was a frustrating way to start but we settled more into our game, but you can’t spot a team three goals in this league.”

The Hurricanes came close to getting on the board late in the period but Nilsson made a great pad save on Warren Foegele as time expired.

Late in the second period Nilsson made another great save in tight on Teuvo Teravainen, but only after Svechnikov beat him on the power play at 10:58 cutting the Senators’ lead to 3-1.

“We’re having a tough time scoring, and when you give away opportunities it makes it impossible. We’ve got to hunker down and not give them any opportunities but that’s not what happened.,” Hurricanes coach Rod Brind’Amour explained.

“It’s soul search time for our group and we’re better than what we’re showing right now, for sure, but tonight that was unacceptable.”