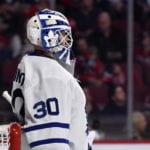 Pageau could fetch a nice return

Frank Seravalli: One GM thinks that the Ottawa Senators could be able to get a first-round pick and a prospect for Jean-Gabriel Pageau at the trade deadline.

It is still early and there haven’t been talks, but will the Senators look to re-sign him or do they move him, especially if they can get a high return?

Petan likely dealt at some point … One more headed to waivers … Dollar-in, Dollar-out … A cheap backup might be needed

Michael Augello: Both Nic Petan and Martin Marincin cleared waivers. Petan will likely get moved by the Toronto Maple Leafs at some point. The Leafs likely don’t want to take a contract back. They are at 49 contracts and would like to clear some salary cap space.
James Mirtle: The Leafs will still have to likely place someone else on waivers early next week (when Zach Hyman is ready to return).

James Mirtle of The Athletic: (mailbag) Maple Leafs GM Kyle Dubas has at least three months before they may have to make a trade to address the blue line. They just got Travis Dermott back. Any deal would need to be dollar-in, dollar-out. They are 4-1-1 in their last six and there is time for them to get a better handle on what they have.

Backup goaltender Michael Hutchinson will face the Blackhawks on Sunday and if they don’t win the fans will be up in arms. (Question asked about Jimmy Howard as a backup option) He carries a $4 million cap hit and up to $1.1 in bonuses which would scare the Leafs. If the Red Wings ate have the cap hit, that would still be $1.3 million for the Leafs before bonuses. If the Leafs acquire another goalie, it will likely be $1 million or less.

Trading Tyson Barrie doesn’t make sense and re-signing Barrie is going to be a long-shot. He may not even want to come back even if the Leafs offer him a similar salary.

Ansar Khan of MLive: Detroit Red Wings GM Steve Yzerman has his hands tied with several contracts that are not tradeable.

You can expect Yzerman to make some other moves before the trade deadline. He’ll look to make ‘value-seeking deals’ like he’s done with Robby Fabbri, Brendan Perlini and Adam Erne.