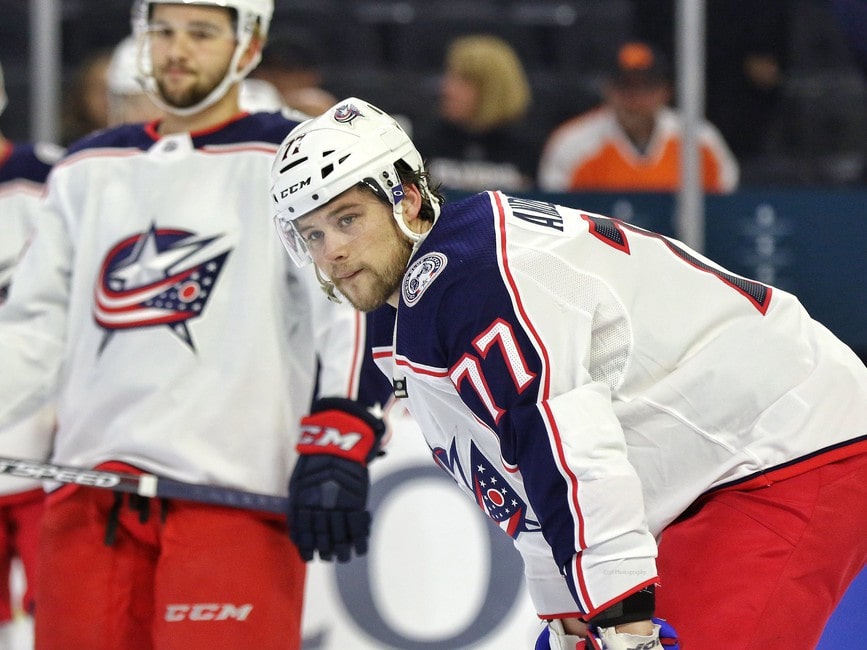 It’s no secret that the Columbus Blue Jackets are struggling early in this new season. When most of your top players are having trouble with even some of the simplest things, you know the issues run deep.

But there is no player off to a worse start on the Blue Jackets this season than Josh Anderson. His struggles couldn’t have come at a worse time for him and for the team.

The Blue Jackets lost to the Colorado Avalanche Saturday night by a score of 4-2. Although the Blue Jackets led 2-1 after one, they couldn’t score again. Then Cale Makar took over the game in the second period and flipped the game the Avalanche’s way. Columbus had no answer for the Calder Trophy front-runner.

That’s where the concerns begin especially with a player like Anderson. Normally when the Blue Jackets need a spark during a game, they go with their energy players Anderson, Boone Jenner and Nick Foligno. However Foligno got a five-minute major and a game misconduct Saturday for charging Pierre-Edouard Bellemare. With Foligno gone, the team couldn’t find the jump it needed from others.

Anderson stands out for many reasons but on Saturday, he was limited to his lowest time-on-ice of the season at just 13:57. He was also held to zero shots on goal. Basically he was nowhere to be found on a night where the Blue Jackets needed their impact players to rise up.

For the season now, Anderson has just two points in 11 games after scoring 27 goals last season. His two points came in the same game in Philadelphia, a game the Blue Jackets lost 7-4. He has been held pointless in the other 10 games. This is a no-show for someone playing for his next contract and someone who has high expectations around him.

If the Blue Jackets were going to move past last season given all their losses, Anderson had to be a reason. Thus far, it’s been a nightmare start. The question we must consider is why. Let’s see if we can come up with some answers on this important question.

The first thing that comes to mind in a situation like this is if Anderson is not healthy. That is a fair question given that Anderson was on IR earlier this season. He missed six games due to an upper-body injury. The belief was that it was his shoulder.

Recall last season that Anderson was limited by a shoulder injury although he played through it in the playoffs. He couldn’t play the way he wanted to though given the injury.

At this point, the player and the team haven’t said anything definitively about a current injury. Anderson is playing but it does seem like he’s not the same player watching on tape. When he’s right, he’s fast. He’s banging bodies. He’s a freight train on skates. I’m just not seeing the same player at this point. Only he truly knows why.

So we don’t know if he’s playing through an injury. Time will tell on that front. Now let’s look at some of his other numbers. We know the points aren’t there. Turns out there’s a lot of other things not there either.

Let’s start on the surface. Anderson has 21 shots on goal in his 11 games, just under two per game. His average the last two seasons, his most successful ones, is around three per game. So we have a 33% drop in this area.

Now couple that with the fact Anderson has one goal on those 21 shots. That’s just 4.8%. His career shooting percentage is 11.2%. So we have another sharp decline. We will need to dig deeper to see what could be causing this.

In reviewing some underlying numbers, we see we have a badly struggling player at all facets of his game. These figures are all per Nat Stat Trick. The first thing that jumps out is Anderson’s CF%. Of all Blue Jackets players with more than 100 minutes of 5-on-5 ice time, his 41.67% is the worst on the team. He’s been on the ice for 115 shot attempts for and 161 against.

So not surprisingly, Anderson’s xGF% is low as well. It checks in at 41.51% which is the worst mark on the Blue Jackets. In terms of scoring chances for and against, Anderson has been on the ice for 122 total chances with just 48 of them for the Blue Jackets. He is not creating enough offense while on the ice while also allowing a high number of chances against.

When Anderson has been on the ice, it’s been advantage opposition in scoring chances, in shot attempts and in expected goals. Per MoneyPuck, the Blue Jackets have an xGF% of 34.9% with Anderson on the ice. It jumps to 52% with him off the ice in all situations. In other words the Blue Jackets are better off scratching him given these figures.

But you know as well as I do that this is not a likely scenario given how important he ultimately is to the team. So what’s the real issue here? Is it injury? Is it lack of confidence? Is it too much pressure knowing it’s a contract year? Anderson is a shell of himself and it is hurting the Blue Jackets.

If he is injured, he needs to address that. If he’s not, he and the team need to wake him up. Many thought Anderson would get to 30 goals this season. He is currently on a pace for 14 points instead. Normally one would expect a turnaround given the very low shooting percentage. But there could be factors in the background influencing what we are seeing. Until he has games more normal of who he is, we can’t say for certain that a quick turnaround is coming.

The thing we need to watch here is how the team tries to get him going. Honestly a healthy scratch wouldn’t be the worst idea in the world. He hasn’t done anything to deserve more ice time of late. With the season starting to slip away, the Blue Jackets need to find something fast.

Will we see the real Anderson anytime soon? The Blue Jackets sure hope so.