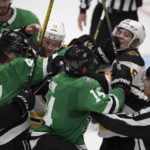 “To say you’re going to make all these changes, people are thinking about trades or whatever, those things don’t happen overnight,” Nill said. “You just don’t go have a bad start to the year and go ‘OK, we’re going to trade four or five guys.’ That doesn’t happen in this business. We’ve got to figure this out internally first. We’ve got to see where we’re at with our team, and then you start to make adjustments from there.”

Nill doesn’t feel any pressure to make any roster or coaching changes.

The Bruins may be wiser to buy low

Joe Haggerty of NBC Sports: The Boston Bruins are a little light on the right side upfront. For now, they will run with internal options but maybe they should get a get ahead of other teams.

Should they take a look at New York Islanders Josh Ho-Sang or Edmonton Oilers Jesse Puljujarvi.

Despite the potential of Ho-Sang, he’s never recorded more than 10 goals or 43 points in the AHL. The cost to acquire him wouldn’t be high as he’s already cleared waivers.

Puljujarvi is averaging a point a game in Finland. He has an out clause and would need to be signed. The Oilers are reportedly looking for a top-nine forward prospect and a draft pick. Options from the Bruins could be Danton Heinen, Anders Bjork, Oskar Steen, Peter Cehlarik and Trent Frederic.

Fans may prefer to the Bruins to target bigger names like Taylor Hall, Alex Tuch or Mike Hoffman, but the Bruins may be better to buy low.