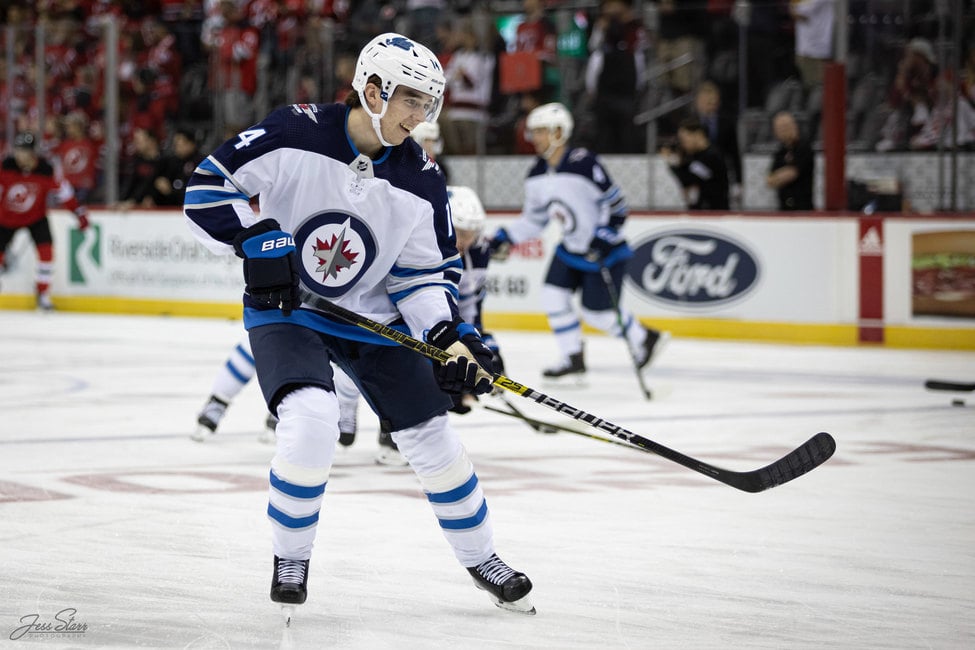 Ville Heinola is fast approaching the nine-game threshold — the maximum number the Winnipeg Jets can allow the rookie defenseman to suit up for before they must “burn” a year of his entry-level contract.

In this case, the Jets should allow that year to burn, baby, burn, like a Disco Inferno.

The simple fact is Heinola has been one of the best of the Jets’ makeshift blue line. The defence was a huge question mark coming into 2019-20 and is no less of one now, nine games in.

The 18-year-old has great hockey IQ and vision, makes efficient and effective reads more often than not, and moves the puck extremely well. He has done nothing but impress, beginning with the outstanding preseason that allowed him to crack the roster despite long odds.

Even head coach Paul Maurice, often loathe to heap too much praise on his players, had some for Heinola after the 2019 first-round pick skated more than 20 minutes against the New York Islanders Thursday after being a healthy scratch for three straight games.

“Good enough to play him 20 minutes,” the bench boss said following the 3-1 loss. “The things you may point at in his game, he’s going to grow out of. The things that he does so very well — surprisingly as an 18-year-old, is a gift. This guy is going to be a really interesting player to watch develop over time. He moves so efficiently around the ice, with such poise. There’s nothing in his game you can’t say wasn’t in any other defenseman’s game. Just young. He was just as good, or better, on most of them. He was good.”

Paul Maurice on Ville Heinola’s performance against the Islanders

Heinola Is Proving He Belongs

Heinola is a compelling candidate to stick around only because he’s made the most of the opportunities he’s been given through his six games.

He looked right at home in his Oct. 3 Broadway debut against the New York Rangers, skating 18:04 and becoming the first player born in 2001 to tally an NHL point. Less than a week later against the Pittsburgh Penguins, he became the youngest defenseman in Jets history to score an NHL goal.

He already has four points, good for third among Jets’ defensemen behind Josh Morrissey and Neal Pionk. He’s also third in average time on ice at 19:29, behind the same two.

Related: Heinola Not the First Jet to Hit Scoresheet in NHL Debut

His possession numbers — a Corsi for percentage of 50.6 and Fenwick for percentage of 48.3 — rank him toward the bottom of Jets’ d-men, but are still respectable given how green he is. He’s also been on the ice for more goals for than goals against, a feat considering the Jets have a negative six-goal differential.

In an ideal world, the Jets would not have to give Heinola a starring role at such a tender age. He would be with the Manitoba Moose or back in Finland, maturing mentally and physically for another year.

However, things are far from ideal on the Jets’ back-end. They lost Ben Chiarot, Tyler Myers, and Jacob Trouba in the offseason and failed to add any veterans to replace them. Nathan Beaulieu is out until at least November, Sami Niku can’t seem to shake the groin injury that hampered his preseason (he’s out of the Moose lineup again), and Dustin Byfuglien continues to hold the team hostage with his ill-timed leave of absence.

Players such as Anthony Bitetto — placed on injured reserve Saturday — and Carl Dahlstrom, as earnestly as they try, are not NHL-calibre defensemen. Not only are both on the Jets’ roster, but they are posting career-highs in ice time.

The Jets simply can’t justify sending Heinola packing while continuing to ice those two — and giving Dmitry Kulikov top-four minutes, for that matter — on a nightly basis.

Heinola’s upside is simply too good to ignore and despite the struggles, he’ll inevitably run into as a boy against men, the Jets need to keep him around for the entirety of 2019-20. There should no more scratching him to delay a decision.

They’ll have to sacrifice the ELC slide, but it’s worth it if they have any notions of making the playoffs and proving wrong those who believe their window to win the Stanley Cup is closed. After all, it would only be “burning” a year if Heinola wasn’t ready for regular NHL duty.