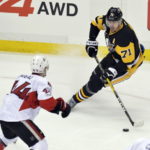 Marleau and his camp think he’ll play this year

James (@Account4hockey): Patrick Marleau and his reps think that he’ll eventually get a deal.

Islanders looking for conditions on a Ho-Sang deal

James (@Account4hockey): The New York Islanders are willing to do a conditional trade involving Josh Ho-Sang. Conditions being how well he plays for another team this year.

Would the Penguins look at Senators centerman?

Ken Warren of the Ottawa Sun: The Ottawa Senators acquired Vladislav Namestinikov from the NY Rangers last night. He’s mostly played wing for the Rangers, but does he move to center for the Senators?

If the Sens want to play him at center, do they have another trade in their plans as they have Colin White, Jean-Gabriel Pageau, Chris Tierney, and Artem Anisimov down the middle?

The Pittsburgh Penguins lost centers Evgeni Malkin and Nick Bjugstad to long-term injuries. Could the Penguins be interested in Tierney and/or Pageau. Both players are in the final year of their deals.

The Jets and their blue line

Murat Ates of The Athletic: It’s well known the holes the Winnipeg Jets blue line is experiencing. Josh Morrissey appears to be ready to return after missing one game.

The Jets decided to take a pass on Joe Morrow, who they are familiar with.

Dallas Stars RFA defenseman Julius Honka is interesting. He hasn’t been able to fully crack the Stars lineup since being drafted in 2014.  Honka has requested a trade and is looking for a change of scenery. Bob McKenzie has said the Stars are looking for a second- or third-round pick for Honka.

Honka would appear to be an upgrade to what the Jets currently have but they shouldn’t be the team he tries to find his game with, and the 2020 draft is believed to be deep.

Right-handed Buffalo Sabres defenseman Rasmus Ristolainen is in the rumor mill. He has three years left at $5.4 million. The cost to acquire isn’t known.

If Byfuglien were to retire, Ristolainen’s cap hit could be manageable.