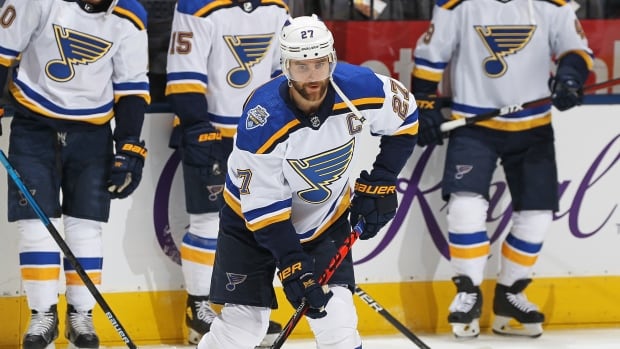 The Toronto Maple Leafs gave the defending Stanley Cup champions all they could handle for long stretches Monday.

And the St. Louis Blues responded with what won them their rings last June — in the end, they found a way.

Alex Pietrangelo scored the winner in the third period and Jordan Binnington was stellar in making 32 saves as St. Louis downed Toronto 3-2.

The Leafs held a 77-51 edge in shot attempts and jumped into a 2-1 lead when Frederik Gauthier and William Nylander scored 24 seconds apart in the second period. But the Blues stayed with their tried and true formula of patience and persistence.

St. Louis got an equalizer 47.3 seconds before the intermission and then ground out the victory over the game’s final 12 minutes after Pietrangelo put the visitors ahead.

St. Louis topped Toronto 3-2 to pick up its seventh-straight win over the Maple Leafs. 1:18

“Good teams find a way to win,” Leafs head coach Mike Babcock said. “They found a way to get one and we didn’t.”

Oskar Sundqvist and Brayden Schenn had the other goals for St. Louis (2-0-1).

Toronto (2-1-1) got 27 saves from Frederik Andersen, who returned to the crease after watching his team blow a 4-1 third-period lead in Saturday’s 6-5 shootout loss to the Montreal Canadiens in the second game of a back-to-back.

The visitors snapped that 2-2 deadlock at 7:51 of the third when David Perron found a pinching Pietrangelo, and he beat a down-and-out Andersen from a tight angle.

The goal was the second of the season for the Blues captain, the 400th point of his career and his 23rd game-winner to break a tie with Al MacInnis for the most by a defenceman in franchise history.

“We’re playing with a lot more movement,” Pietrangelo said. “We did that in the second half of [last season]. We’re moving a lot more on the blue line, we’ve got defencemen that can make plays.

“The more movement we have, the better we are.”

St. Louis had a chance to put the game away when Toronto defenceman Jake Muzzin was penalized for slashing with 4:57 left in regulation, but the Leafs had the best opportunity when Binnington robbed Ilya Mikheyev with his right pad off the rush.

Toronto pressed with Andersen on the bench for the extra attacker, but couldn’t find a way past Binnington and the Blues’ stout, playoff-tested defence.

“The boys have been battling,” said Binnington, a native of nearby Richmond Hill, Ont., who had dozens of family and friends in the stands for his first start at Scotiabank Arena. “That was another good comeback victory.”

The Blues opened the scoring at 8:30 of the second when Sundqvist — the Blues’ fourth-line centre — moved in on Andersen and blasted a slapshot that Leafs defenceman Tyson Barrie tried to block with his stick.

“I wanted to make that save,” Andersen said. “But if you’ve ever stopped a hockey puck you’d know it’s tough when there’s stuff going on in front of the puck.

“But obviously a save I’ve got to have.”

The Leafs responded with a spirited fourth-line shift of their own to tie the score when Jason Spezza batted a puck out of the air to Gauthier, who banged home his second of the season at 11:34.

A healthy scratch for two of Toronto’s first three games, Spezza suited up at home for the first time in blue and white, and registered his first point with the Leafs after signing for the league minimum in free agency on July 1.

“It’s a huge honour to play here,” said the 36-year-old. “It was nice to play in front of the home crowd … something I was looking forward to all summer.”

Fans were on their feet again 24 seconds later when Nylander finished off a beautiful passing play with Cody Ceci and Andreas Johnsson for his second to put the Leafs up 2-1.

Rob Pizzo looks at which teams have the best chance to win Canada’s first Stanley Cup since 1993. 3:43

Following a long contract impasse that dragged into December, it took Nylander until his 24th game to score his second goal of the 2018-19 campaign.

But the Blues, who went from last in the overall standings in January to winning the franchise’s first title, pushed back late in the period and got the equalizer when Schenn beat Andersen between the pads after Morgan Rielly turned the puck over.

‘They just have so much skill’

“They’re the champs, they’re a very patient team,” said Spezza, whose team hosts the Tampa Bay Lightning on Thursday. “We hung with them all night and a bounce here or there could have been a different story.”

The 26-year-old Binnington, who beat the Leafs 3-2 in overtime at Enterprise Center on Feb. 19 after taking over the No. 1 job the previous month, was helped out by two posts in a busy first.

Toronto centre Alexander Kerfoot found iron just two minutes in and Auston Matthews, who entered with five goals in three games to open the campaign, then chimed another shot off the post behind Binnington on a Toronto power play before Nylander couldn’t quite control a loose puck.

“They just have so much skill,” Binnington said. “They move the puck and they want to go forward. It’s probably fun to play in that system, but we handled it.

“Both teams played well. I’m happy we came out on top.”