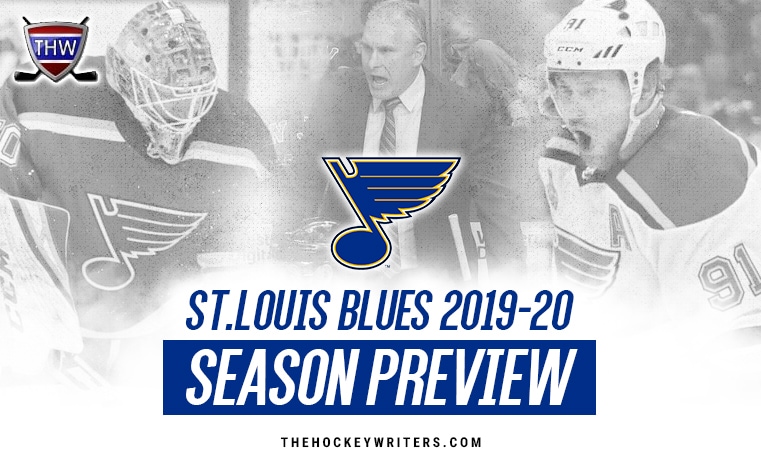 The St. Louis Blues shocked the world last season, going from last place on Jan. 3 to Stanley Cup Champions on June 12. While it was one of the greatest comebacks in NHL history and the most successful season ever for the Blues, it leaves serious questions about what the team will look like this season.

With opening night just two days away, what better time to try and answer those questions than right now? The roster is largely the same, but the expectations are raised. What’s to come for the Blues in the 2019-20 season?

As strange as it is to believe, the 2019-20 season will be the Blues’ first full campaign under head coach Craig Berube. The legendary tough guy and veteran of 1,054 NHL games became just the seventh coach in NHL history to coach his team to a Stanley Cup Championship after a midseason coaching change.

Berube retained his championship staff to the letter but replaced the vacancy he left when the team promoted him by hiring Marc Savard as a special teams coach. The Blues desperately need his assistance. Though the team finished 10th on the power play in the regular season, the unit struggled towards the end of the season and disappeared in the playoffs, converting just 13 times in 80 opportunities.

Coming off of one of the greatest individual seasons ever by a Blues player, his first with the team, can Ryan O’Reilly replicate the success he had after arriving from the Buffalo Sabres? The 2019 Frank J. Selke and Conn Smythe Trophy winner set a career-high with 77 points as a plus-22. He averaged well over 20 minutes a game in the regular season, before adding a league-leading 23 points in 26 postseason games.

While it seems unreasonable to expect O’Reilly to match his 2018-19 success, can the Clinton, Ontario native still be the team leader in points? He became a fan favorite for his commitment and his hardworking attitude, but now that he isn’t a fresh face, what will a second season look like? As long as he passes 60 points, remains a faceoff magician, and leads the pack on special teams, it should be yet another tremendous season for O’Reilly.

Blues fans have long known that Jaden Schwartz was their team’s engine. So it’s no surprise that when he had a dreadful start to the 2018-19 season, he dragged the team down with him. Though the analytics always suggested that Schwartz was better than his results, the 36 points and just 11 goals he produced in 69 regular-season games were certainly disappointing.

The beginning of the playoffs seemed like a hard reset for Schwartz’s season, as the “engine” powered up to finish second on the team with 20 points. he also scored two hat tricks, one of them in the deciding game of the first round. Will the postseason Schwartz show up at the start of the regular season, and return to the 25-plus goal scorer he’s been in the past? That renaissance is critical to the Blues’ success in 2019-20.

There is no wild card quite as wild as Robby Fabbri this season. The former first-round pick from 2014, spent the season trying to come back from consecutive serious knee injuries. He never built momentum, struggled to find the faith of his new head coach Berube, and finished with just 6 points in 32 games.

Many analysts believe it is the second season after a knee injury where the player truly returns to form. There’s no doubting Fabbri’s talent: he was the Blues’ rising star before injury afflicted his career. He was on a 46 point pace the season he suffered his first ACL tear. But recovery has been hard. If Fabbri can somehow recover his prior form, he would be a huge ace in the hole for the Blues. At just 23, he’s still a very young player. But he’ll need to earn his opportunity and fight to keep it in a loaded forward corps.

The biggest mystery about the Blues’ forward group is who will play on the second line with O’Reilly and David Perron. For many of the young forwards looking to establish themselves, playing with the two veteran playmakers is a dream scenario. Zach Sanford found success with the duo periodically during the season and then again found momentum with them in the Stanley Cup Final, notching four points as a plus-five in five games, including the final Blues goal of the series. He figures to get the first crack on the line heading into the season.

Other possibilities for that unit include Fabbri if he can find momentum, Sammy Blais, who also entrenched himself on the roster with a sterling late-playoff performance, and even prospect Jordan Kyrou when he gets healthy (we’ll discuss him in more detail momentarily).

Blais, Sanford, and Fabbri will be fighting for playing time all season, and likely may be competing for a longterm spot in the organization. The Blues have several top forward prospects pushing for spots as well, and any of this group could become a tradeable asset. But one thing is certain: whoever finds a niche on the second line with O’Reilly and Perron will make themselves virtually indispensable, and could approach or surpass 20 goals on the season.

The Blues shocked the hockey world out of its preseason slumber last week when they traded Joel Edmundson and prospect Dominik Bokk to the Carolina Hurricanes for right-handed defenseman Justin Faulk. With Alex Pietrangelo and Colton Parayko in-house, a third righty like Faulk gives the Blues a loaded right side, but lots of questions about how the lines will match up.

Faulk answers a big need for the Blues, as his history as a powerplay quarterback should strengthen the aforementioned weakness in that unit. But the pairings are still a question. Will Faulk or Pietrangelo play as a pair with one on his off-hand? Or will Vince Dunn jump up to the top pairing, allowing Faulk to play on the third pair and get big minutes on the power play? Likely, the Blues will try everything in the early part of the season, looking to find what works en route to a likely postseason appearance.

Speaking of Dunn, he is arguably the Blues’ most underrated player, and the possibility of his joining Pietrangelo on the top pairing could make this his breakout campaign. He was the team leader in relative Corsi for percentage (CF% rel), which means the team possessed the puck best with Dunn on the ice, and he also finished with 7.2 point shares, tied with Parayko for fourth on the team.

Dunn, who will turn just 23 early in the season, is a strong skater and has elite puck control for a defenseman. He collected 12 goals and 35 points in 78 games last season, and could easily jump those totals towards 20 and 50 respectively with more exposure on the top pairing and the power play. He is already the Blues’ best left-handed defenseman, and with more exposure, he could be a breakout player in the league.

The Blues have plenty of both flexibility and depth on the blueline coming into the season. In addition to the aforementioned options, they went out and acquired Andreas Borgman, a veteran of 48 games with the Toronto Maple Leafs, to supplement the left side. With Edmundson’s departure, that depth is even more important. Robert Bortuzzo is also in the mix on the right side and will be for three more seasons after signing a cost-controlled $4.125 million extension last season.

Beyond that, the Blues have additional defensive depth in prospects like Mitch Reinke, whom we’ll discuss shortly, and Niko Mikkola, as well as American Hockey League (AHL) blueliners like Derrick Pouliot and Joey LaLeggia. It’s a top-heavy group, but the system is solid, and replacements won’t be hard to find in the event of an injury.

The story of the Blues goaltending is no secret. Jake Allen has struggled to establish himself ever since Brian Elliott departed in 2016, and last season was no different. The only change was that Jordan Binnington, who began the campaign as an AHL backup, rose to become the first-ever goaltender to win 16 playoff games as a rookie en route to a Stanley Cup Championship.

Binnington will enter the season as the unquestioned starter, but with just 58 combined regular season and postseason games under his belt, it’s not unfair to say that the Blues don’t really know what they have in the second-place Calder finisher. The team chose to hang onto Allen over the summer rather than trade him and shop for a cheaper backup, so if somehow Binnington falters, they have an experienced alternative. That would be little comfort to many Blues fans, though, as most believe Binnington is the goalie of the future.

The Blues have a number of prospects who could push to make an impact this year. Klim Kostin had a tremendous preseason, and many thought he might make the roster out of camp; however, the Blues announced him as one of their final cuts on Sunday. He joins Kyrou as the most likely forwards to make a significant impact this season. The latter is recovering from offseason knee surgery and is expected to return to the AHL team soon.

On the blueline, along with the aforementioned youngsters looking to make an impact like Borgman and Mikkola, Reinke seemed the most likely to step into an NHL role before the Blues acquired Faulk. Now, the undrafted college signing who broke Keith Yandle’s San Antonio Rampage franchise record for points as a rookie defenseman will likely spend the season with that team. But if the Blues suffer an unexpected injury or make another trade on the right side, Reinke should be primed to take over the empty spot.

In the event that the Blues suffer an injury in net, or pivot and decide to trade Allen to a needy team at the trade deadline after Binnington establishes himself, Ville Husso should be ready to back up at the NHL level. the former goalie-in-waiting had a dreadful season in 2018-19, but the potential is still there, and he will need some NHL opportunities before long.

The Blues were all over the map last season, and as such, it is somewhat difficult to know what to expect entering the 2019-20 campaign. The woes of last season should be in the distant past, but will the Blues come out firing from postseason glory, or stumbling because of a playoff hangover?

Dom Luszczyszyn of The Athletic projects the Blues to lead the Western Conference with roughly 101 points thanks to their stalwart defense and organizational depth. While a Presidents’ Trophy is likely out of the question thanks to the loaded Atlantic Division, the Blues have not led their division since 2014-15, and haven’t topped the conference since they won their lone Presidents’ Trophy in 1999-00. If Binnington is a fraction of what he was last season and players like Schwartz and Fabbri bounce back from poor regular seasons, it certainly isn’t out of the question.

The Bottom Line: Can They Repeat?

With that said, no one in St. Louis is focused on winning the division or even the conference. Now that the team has had a taste of glory, fans are anxious to return to the promised land again. But can the Blues do it?

Winning one Stanley Cup is accomplishment enough. Repeating in the modern era is almost impossible, which is why only the Pittsburgh Penguins of 2015-2017 have accomplished the feat in the last 20 years.

The Blues have plenty of organizational depth, a rock-solid defense, and tons of playoff experience, three of the biggest keys to playoff success. So anything is possible. But whether they repeat or not, Blues fans are in for another exciting and successful season, something that seemed impossible even just ten months ago.