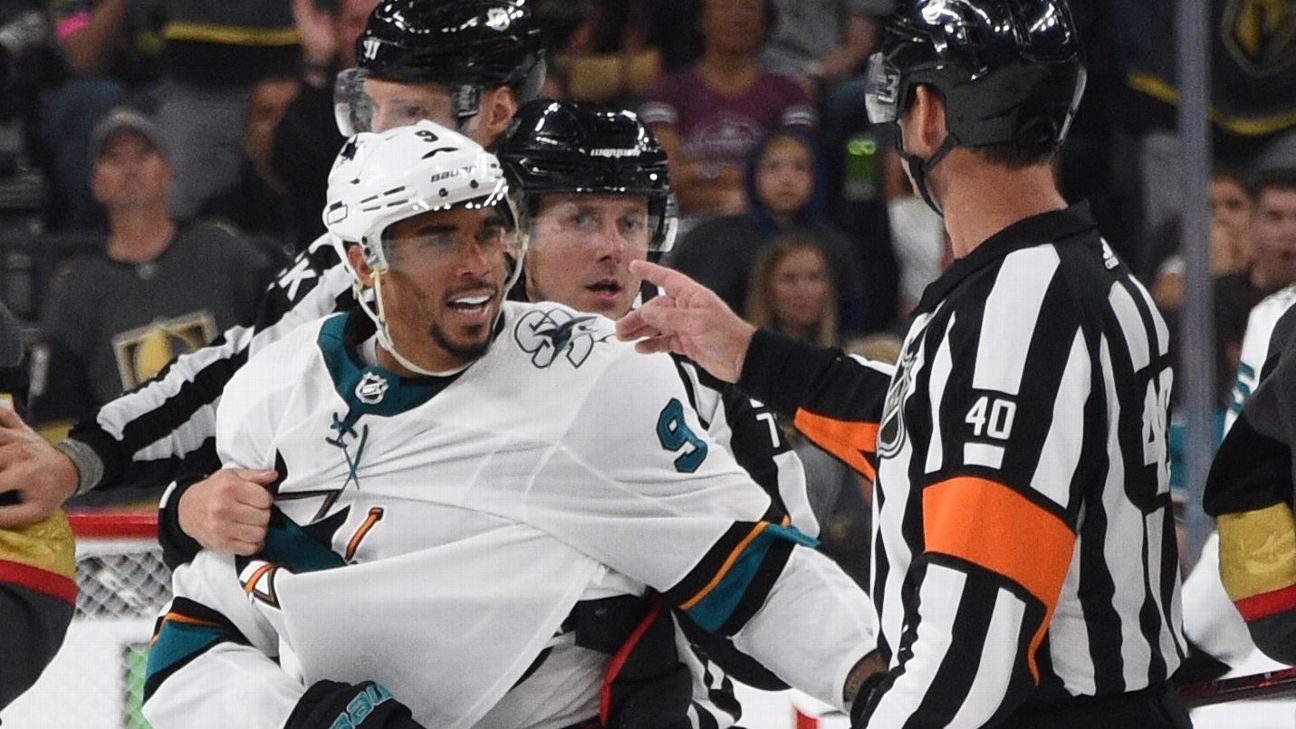 San Jose Sharks winger Evander Kane called his ejection for abuse of officials on Sunday night “an absolute joke,” while claiming there’s a double standard in the way NHL refs treat him.

At 12 minutes, 51 seconds of the third period in a preseason loss at the Vegas Golden Knights, Kane and Deryk Engelland got into an altercation after the Knights defenseman held Kane’s stick following a hit by the Sharks forward.

Engelland cross-checked him, and Kane responded with a slash that appeared to also make contact with linesman Kiel Murchison. As Kane skated back up the ice, Murchison grabbed the front of his jersey, apparently trying to prevent an escalation with Engelland, and they tumbled to the ice.

The officials gave both players misconduct penalties, but Kane was ejected for abuse of officials. He yelled at the refs from the Sharks’ bench before heading to the dressing room.

Evander Kane gets ejected in his last preseason game for “abuse of officials.” pic.twitter.com/OAKcqPWf2I

“I get kicked out of the game for getting jumped from behind by a referee. I’ve never seen a ref take five strides,” Kane said after the 5-1 defeat. “If you look at his face, he’s getting all this power and he’s trying to drive me into the ice, which is what he did. That’s unbelievable. Talk about abuse of an official? How about abuse of a player? It’s an absolute joke.”

Kane, 28, said there was no explanation for his ejection.

“I was just skating up the ice. Minding my own business, and next thing you know I get driven into the ice by one of the officials. I wasn’t even engaged with one of their players,” he said. “Explain that to me, how I get kicked out of the game for that. Baffling.”

Before his ejection, Kane was penalized for roughing and then fighting Knights forward Valentin Zykov. He said his treatment at the hands of the linesman was part of a larger pattern, and that officials react to him in a different way than they do with other players.

“It’s funny … if you look at the way I get treated out there when it comes to the scrums, or when the other team is trying to do [something] to me, there’s a massive difference compared to everybody else on the ice,” he said.

Kane was tied for the NHL lead with three game misconducts last season.