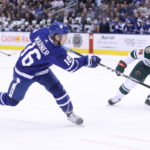 Mitch Marner received two offer sheets this offseason, and he wasn’t interested at all

Maple Leafs Hot Stove: Mitch Marner’s agent Darren Ferris was on TSN 1050 yesterday and was talking about the negotiation process with the Toronto Maple Leafs and about offer sheets.

“That’s why I laughed when I heard some of the reports from some people about what was going on — that their source told them this. Everybody, as you see today, was wrong. It was unfortunate that the way the events were going during the summer and I had to keep Mitch at bay there, too, so that he understood not to be on social media and not to listen to some of these people who think they’re experts. It was a rough going.”

Absolutely. I’ll tell you there were two presented to him in the summer — two opportunities, which he declined. He told me, “Darren, I don’t want to sign. I want to be a Leaf.” We declined both of those opportunities. I know Kyle was aware of one of them. The team had actually had told him that they had made the overture to Mitch. There was a very, very strong likelihood there were more being presented once the season started and the cap number gets set and makes it more difficult for a team to match.”

Ferris adds that there was never really a crazy gap between the sides. They were usually in the same ballpark when it came to money. Term was basically the main stumbling block.

Kristen Shilton: Mitch Marner on offer sheets: “As soon as Darren mentioned , I told him right away I don’t want to explore that option. But I didn’t want to miss training camp…or any games this season, so that’s why I really forced the issue with Kyle to get something done and get me here”

Matthew Barnaby: Had been told that the two offer sheets that Marner received were from the Minnesota Wild and Columbus Blue Jackets.

Michael Russo: Have been told by “the highest sources” that a Mitch Marner offer sheet from the Wild is not true.

It would have been under former GM Paul Fenton. When looking at all the numbers, hard to see how it could be true.

L.A. Lariviere: “Interesting that #Marner’s agent told us in July that reports his client had turned down 2 offer sheets were “fake news”. #NYI thought to be among them.” Ferris also noted that he didn’t want to negotiate through the media.