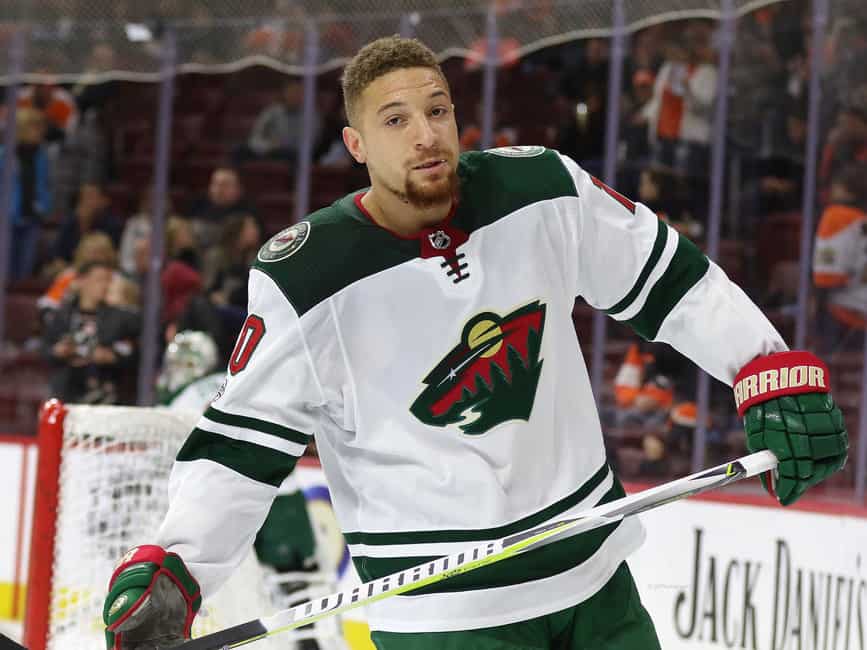 Minus any suitable NHL offers last summer, the big forward was ready to pull up stakes and head to Russia’s Kontinental Hockey League in hopes of resurrecting his career.

Then he got cold feet.

“I just heard too many horror stories, so when it came down to actually going I backed out last minute,” said Stewart, who had signed on with HC Slovan Bratislava in Slovakia. “It just didn’t feel right.”

Following some time away from the game, that change of heart led the Toronto native and veteran of nearly 700 NHL games down an even less-travelled path — Britain’s Elite Ice Hockey League.

Stewart, who turns 32 in October, wound up inking a deal with the Nottingham Panthers, putting up six goals and 13 points in 23 games.

“The fans definitely loved their beers,” he said with a laugh. “They had all their soccer chants going. The hockey is better than I expected. It was fun just to play in a stress-free environment, handle the puck and score some goals.

“It was a step in the right direction and was phase one of the plan for making my comeback. I was thankful to get the opportunity. Now we’re moving onto phase two.”

That started with a recommitment to training this summer in his hometown of Toronto with Biosteel founder Matt Nichol alongside a host of NHLers, other professionals and junior players.

Stewart — who has 160 goals, 321 points and 729 penalty minutes in 652 career regular-season NHL games over 10 seasons with six franchises — then saw an opening with the Philadelphia Flyers, agreeing to a professional tryout in July.

Never shy about throwing his weight around, the six-foot-two, 242-pound winger — who has six goals and 11 points in 39 playoff games — is keen to make an impression when training camp opens later this week.

Flyers Made the Most Sense

“It kind of just happened by chance,” said Stewart, one of 16 players across the NHL on PTOs. “Once I saw (the Flyers) got rid of Wayne Simmonds, Dale Weise, and traded Radko Gudas, they didn’t have a lot of physicality in their lineup.

“That organization made the most sense.”

Stewart signed his most recent NHL contract with the Minnesota Wild back in 2016 when Flyers general manager Chuck Fletcher was in charge. He was also put on waivers by Fletcher in February 2018 before getting scooped up by the Calgary Flames.

Flyers assistant coach Ian Laperriere, meanwhile, is a member of the newly-hired Alain Vigneault’s staff and played for the Colorado Avalanche when Stewart was a rookie on the team in 2008-09.

Stewart said even though hockey is trending towards smaller, quicker players, there’s still a need for size and strength — as long as they can skate.

“As much as the game’s changed, you look at the Stanley Cup final and the last two winners, they’re both physical teams,” he said. “Come playoff time, you definitely need a couple guys in your lineup that bring that sandpaper and can wear teams down. On top of that, I’m confident in my offensive abilities. My last year in the league I had 10 goals in 50 games on the fourth line playing 11 minutes.

“I can skate with these young guys. I’m a big guy, I can move. I’m going into Philly to make some noise.”

But the thought did cross Stewart’s mind last season that his NHL life might be over. If that was the case, he wasn’t going to lose any sleep.

It will be an uphill battle to make the Flyers — players on PTOs are without contracts and promised nothing — but he’s eager to give it one more shot.

“I’m very comfortable in my own skin,” Stewart said. “I played 10 years in the NHL. I’d give anything to have an 11th, but if I don’t is that going to make me feel any less successful? I don’t think so. I wanted to put my best foot forward and have one last summer of giving everything I had.

“Whatever happens in October, I’m willing to live with it.”