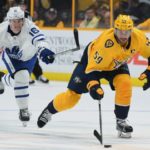 “I don’t look at it that the team has to win ‘X’ amount of games or Mike has to do anything. Mike’s proven himself elite a long time. What we’ll be watching for at the beginning of the season and at the end is how the team is playing. There have been stretches in the past where we haven’t played well and won and played very well and been losing. The key focus will be, are we incorporating the changes we want to make?

“It’s a long year, and to say we have to win ‘X’ amount the first month or first two months is not really the way I’ve ever approached hockey. The major focus will be on the process of how we’re playing versus points.”

The Predators and Josi have talked, but no extension in place yet

Adam Vingan of The Athletic: Nashville Predators defenseman Roman Josi was eligible to sign a contract extension starting back on July 1st. He obviously hasn’t signed one yet and knows it will likely become a hot topic.

One agent suggested that the large group of current unsigned RFAs is holding up things. Teams need to still sign them, with some needing to make trades to move out salary.

“There are teams that are in desperate need of moving some bodies to create cap space, but they can’t because none of the clubs that they think are in a position to take on a player want to do anything until they have a better understanding of what their RFAs are going to cost them, so everything is somewhat frozen. In the past, you’d have clubs looking ahead to maybe get a head start on their UFA, but the attention just hasn’t been directed toward them because everyone’s concerned about getting those RFAs done.”

Both the Predators and Josi want to get something done. The sides talked throughout the summer. On the open market, Josi might be able to ask for eight-figures. His next deal will make him the highest paid Predators – more than Ryan Johansen‘s and Matt Duchene‘s $8 million.