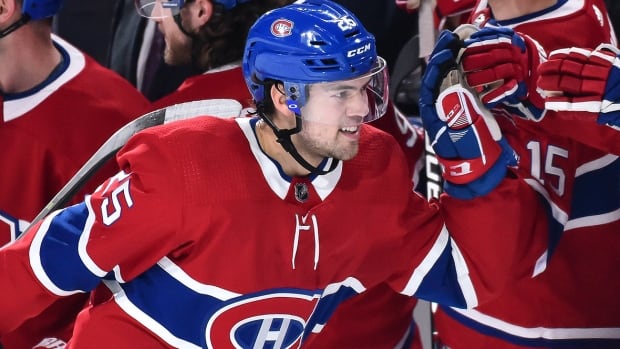 The Montreal Canadiens’ franchise player is ready to win now, even if many fans are looking toward the future.

“A lot of guys you see go through their whole careers and not get an opportunity. I don’t want to be one of those guys. I want to get there,” goaltender Carey Price said.

Price, along with other Habs players and management, met the media Monday morning in Laval Que., hours before they were set to tee off for their annual pre-training camp golf tournament at Club Laval-sur-le-Lac.

The team is looking to avoid missing the playoffs for the third consecutive season, something that hasn’t been done since a run from 1998 to 2001.

The Canadiens were eliminated from playoff contention last season on the penultimate day of the campaign.

“It’s going to be a process though, we know that,” Price added. “Just try to lay it out there all season long.”

Many questions focus on whether young players from the Habs’ much-hyped prospect pool, including forwards Nick Suzuki and Ryan Poehling, can crack the roster.

Ryan Poehling scored a hat-trick and the shootout winner for the Montreal Canadiens in a thrilling 6-5 win for the Habs in their season finale. 3:34

Suzuki, a 2017 first-round pick of the Vegas Golden Knights, was traded to Montreal in a move sending former captain Max Pacioretty the other way. Poehling, 20, had fans salivating after scoring a hat trick and a shootout winner against the Toronto Maple Leafs in his NHL debut in last year’s season finale.

Nothing better for our organization than to have a young player make our hockey club.— Canadiens GM Marc Bergevin on the team’s change in direction

“I’ve always embraced those kinds of situations where you have tough decisions to make,” coach Claude Julien said. “I like that problem more than not having one at all and saying ‘these are the guys we have and we have no choice.”‘

Canadiens general manager Marc Bergevin said that the team won’t be signing any players to professional tryout contracts, veterans who would’ve otherwise pushed younger charges for jobs. That includes 40-year-old defenceman Andrei Markov, who had hoped to return to Montreal after spending the last two seasons in the Kontinental Hockey League.

“We’re heading in a new direction,” Canadiens owner Geoff Molson said. “My message to Andrei is thank you so much for everything you did. For almost a thousand games. We’ll never forget it. We can’t wait to have him back at the Bell Centre to celebrate a great defenceman. One of the great defencemen that ever played for the Montreal Canadiens.”

The Canadiens signed forward Nick Cousins, defenceman Ben Chiarot, and backup goalie Keith Kinkaid in the off-season. But they failed to sign restricted free agent Sebastian Aho from the Carolina Hurricanes after their offer sheet was matched earlier this summer.

The Habs also lost out on defenceman Jake Gardiner to the ‘Canes after he signed a four-year, $16.2-million US deal last week.

“We had interest. We made an offer,” Bergevin said when asked about Gardiner. “It’s a two-way street. If you’re interested, the player also has to be interested. I can’t comment on why he didn’t. But, yes we did [make an offer].”

Regardless, the Habs feel confident they have a squad that can make the post-season.

“We all realize that after last season, how close we were, but at the same time it wasn’t good enough,” Habs forward Tomas Tatar said. “I think everybody worked hard. We think the future looks bright. We have some great players upcoming. It’s going to be up to us to have a good camp, have focus, and be ready.”

The Canadiens’ prospects will play a game against U Sports players on Tuesday, two days before their training camp is scheduled to begin.