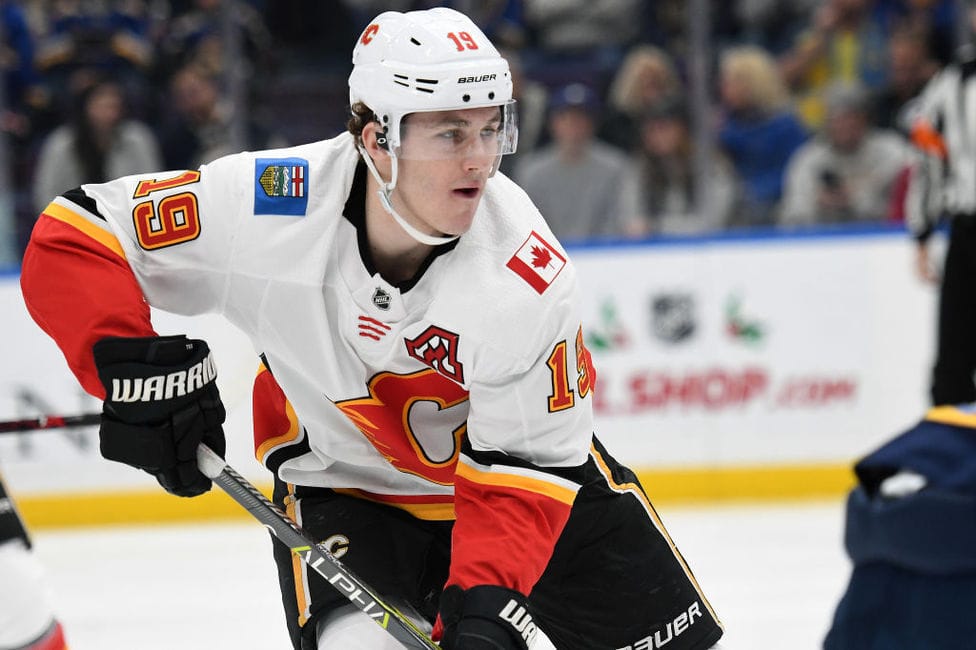 Tkachuk – whose three-year, $2.775 million entry-level rookie contract expired on July 1 of this year – is expected to become the highest salaried Flame of all-time and one of the best-paid players from his 2016 NHL Draft class, where he was the sixth selection of the first round. Other high profile RFAs who are seeking new deals are Winnipeg Jets sniper Patrik Laine, Toronto Maple Leafs scoring leader Mitch Marner, Tampa Bay Lightning point-getter Brayden Point, Colorado Avalanche playmaker Mikko Rantanen, Vancouver Canucks Calder Trophy runner-up Brock Boeser, and Boston Bruins productive blueliner Charlie McAvoy, among others.

Maple Leafs center Auston Matthews set the bar for 2019 RFA salaries in February by signing a massive five-year, $51.8 million extension, paying him an average of $11.63 million per year through the 2023-24 season. He bet on himself, opting for a shorter contract than he was eligible for, as he could have inked an eight-year deal. Fellow Maple Leafs phenom Marner is making fans sweat, as he is looking for similar money to his young teammate.

Marner, Tkachuk, Laine, Point, et al are watching and waiting to see who signs for what and for how long. It’s expected that once one of the top RFAs does put pen to paper on a new contract, the others will have a barometer to go by in their negotiations and the dominoes will begin to fall.

The salary cap for the 2019-20 season was set at $81.5 million, up by two million from the previous season. NHL Commissioner Gary Bettman announced the new number on July 1 of this year. Given that most teams were waiting to hear the new, hard number, it was prudent to wait until after July 1 to get into serious negotiations. Now it is up to each general manager to try and fit all the contracts under that ceiling. Flames GM Brad Treliving recently inked fan favorites Sam Bennett and David Rittich, so the money is getting tight down at the Stampede grounds.

Aside from Tkachuk, winger Andrew Mangiapane – who showed flashes of what the diminutive dynamo might become – needs a raise. The fourth-liner is a priority for the Flames to get inked. With approximately $7.75 million of available cap space to sign the two young pieces, it is realistic to assume a current Flame will be moved to give Treliving the cap space needed.

Rumors of pricey defencemen TJ Brodie or Travis Hamonic being on the trade block were persistent until the recent knee injury to Finnish rearguard Juuso Valimaki changed that strategy. Something does have to give at the expense of signing Tkachuk and Mangiapane, and the loss of an inexpensive young starting defender in Valimaki makes Treviling’s challenge that much more daunting, but no less imperative.

Treliving isn’t giving up much of anything regarding the signing of Tkachuk other than to tell the media that he expects to have a deal done before the beginning of training camp in September.

“That’s been our expectation, our hope, our goal,” said the affable GM to a gathering of the media in early August. “That’s what we’re working toward. I know that’s what Matthew wants as well. We’ve got to keep working away at it and get to the point where we can get a deal done that works for everybody. That’s certainly our goal. Nothing has changed in that respect. We’ll continue to grind away at it.”

Should the parties involved – Treliving and Tkachuk’s agent Craig Oster – not complete a deal by the beginning of camp, it would be a scenario distressing to all. Tkachuk could sit out the season or take his game to Europe. He could hold out as Johnny Gaudreau did in 2016, who finally signed on Oct. 10 of that year. ‘Johnny Hockey’ had a slow start to that season and didn’t quite reach his stride until well into the campaign. And then there’s the whole William Nylander saga. The young Maple Leafs star – who was an RFA last season – didn’t sign until Dec. 1 and failed to play to his capabilities, finishing the season with a disappointing 27 points in 54 games.

To avoid any interruption in the Flames’ pursuit to be a serious Stanley Cup contender, Calgary must avoid a Gaudreau/Nylander type soap opera regarding Tkachuk. Negotiating a mutually agreeable contract with the future team captain and face of the franchise is paramount. Whether that contract is a bridge deal of two or three years, a five-year deal or the maximum of eight years, it’s crucial that the burly agitator is on the ice at the beginning of camp. Tkachuk will become eligible to be an unrestricted free agent on July 1, 2023.