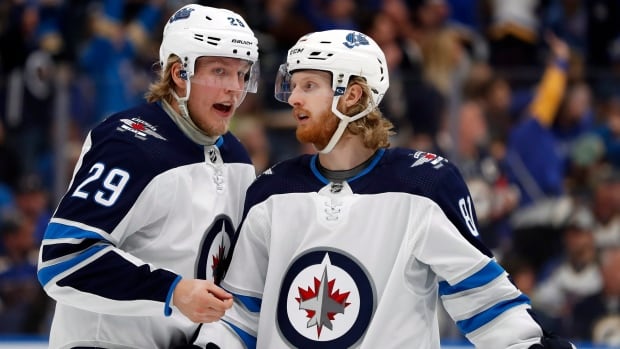 To prepare you for the opening of NHL training camps in mid-September, CBC Sports will do a deep dive on each of the seven Canadian-based clubs every Thursday. Today, we examine the Winnipeg Jets.

There is less than a month to go before the Jets open training camp, and like plenty of NHL teams, they have a couple of critical players unsigned in restricted free agents Patrik Laine and Kyle Connor.

Two months ago, the Jets began to clear some salary cap space and have paid a hefty price to reduce their payroll. Jacob Trouba was dealt to the New York Rangers in exchange for Neal Pionk and the 20th overall selection in the 2019 draft, Finnish defenceman Ville Heinola.

Each was an unrestricted free agent. Myers bolted out West to the Vancouver Canucks, while Chiarot signed on to bolster the Montreal Canadiens blue-line and Tanev upped the grit level with the Pittsburgh Penguins.

Centre Kevin Hayes also signed with the Philadelphia Flyers. His brief stint with Jets after being acquired at the trade deadline never caught on in Winnipeg the way Paul Stastny did the year before.

Winnipeg general manager Kevin Cheveldayoff always has been confident and content to develop players from within.

He’s also shopping around veteran forward Mathieu Perreault and defenceman Dmitri Kulikov in the hopes of shedding more salary. But each makes more than $4 million US per season and will be challenging to move.

Even though four months have elapsed since the Jets quick six-game elimination from the playoffs in the first round to the eventual Stanley Cup-champion St. Louis Blues, the outcome still stings.

The Jets were not alone. They and the three other teams from the 2018 conference finals — the Washington Capitals, Tampa Bay Lightning and Vegas Golden Knights — each found themselves on the sidelines after the opening round of the 2019 playoffs.

The Jets advanced to the West final in 2018, and big things were expected from Mark Scheifele and company last spring. But the Blues’ toughness and determination proved to be too much.

The Jets still are a playoff-bound team, but their contender status has taken a hit with the loss of the aforementioned key players, especially three of their top five defenceman.

Trouba was a capable partner for the emerging Josh Morrissey. Myers and Chiarot have size and mobility and they gobbled up minutes. Their departure leaves a blue line significantly downgraded.

Mid-sized 6-foot-1, 176-pound Sami Niku will get a shot on the Jets blue-line and could see some power-play time with their second unit. He played 30 games for Winnipeg last season.

Defenceman Tucker Poolman and forwards Mason Appleton and Kristian Vesalainen will get a chance to fill in for the absences. Vesalainen, Andrew Copp and Jack Roslovic are options to be promoted to the top six forwards if Connor and Laine aren’t signed in time.

But the two wingers who combined for 64 goals last season are paramount to the Jets’ future. Sure, Laine faded down the stretch. He had only one goal in the final 19 regular-season games, and none of his three playoff goals were significant.

It will be up to Maurice, who enters his seventh season behind the Jets’ bench, to make Laine more accountable and further develop the core of the team.