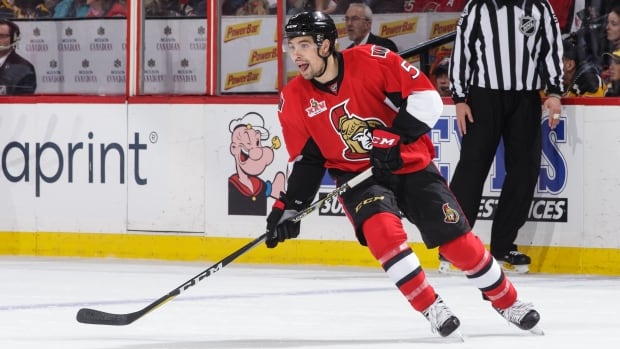 An Ottawa woman who was left with second- and third-degree burns when she was “engulfed in flames” at a dinner party hosted by Cody Ceci is now suing the former Ottawa Senators player and others for more than $8 million in damages.

Hana Engel, 25, suffered burns to 35 per cent of her body after an incident on May 9, 2018, that involved an outdoor tabletop fireplace at Ceci’s Stittsville home, according to her statement of claim filed July 24.

It alleges Engel was “immediately engulfed in flames” when Ceci’s common-law partner, Jamie Thompson, a co-defendant in the suit, accidently ignited her with flaming liquid ethanol burner fuel.

Thompson was trying to refill one of the burners on the outdoor fireplace at about 9 p.m. while Engel and other guests were seated around the table, according to the statement of claim.

The lawsuit claims Thompson squirted the ethanol onto the burner without checking to determine if it had cooled or completely extinguished, causing flames and ethanol to jet out of the bottle, which was still in her hands.

“The defendant Thompson immediately threw the burning bottle in Hana’s direction,” the statement of claim said. “Hana’s clothing caught fire and she was immediately engulfed in flames.”

None of the allegations in the statement of claim has been tested in court.

The lawsuit also makes allegations against Clair de Lune Products, Inc., the manufacturer of the tabletop ethanol fireplace, and its subsidiary, Les Distributions Orca Lite Inc., which distributed and sold the ethanol biofuel marketed for use in its tabletop fireplaces.

The allegations relate to the make and design of the fireplace and issues regarding the instructions and warning labels on the products.

According to the lawsuit, Clair de Lune stopped selling the tabletop ethanol fireplace following the incident.

Statements of defence have not yet been filed by any of the defendants.

Engel is seeking more than $6 million in damages for pain and suffering, loss of amenities, loss of enjoyment of life, loss of housekeeping and homemaking capacity, loss of income, loss of competitive advantage in the marketplace and loss of economic opportunities.

The statement of claim describes her as a “talented and ambitious” yoga enthusiast and businesswoman who owned and operated a yoga studio in Ottawa.

The claim states she was in a coma for three weeks and had to undergo three surgeries after the incident. It also notes her appearance has been changed permanently and she continues to seek ongoing rehabilitation and treatment.

Engel’s common-law partner, Jacob Cardwell, as well as her parents, Bruce and Bonnie Engel, and her siblings, Matthew and Sabrina Engel, are also named as plaintiffs in the lawsuit.

Cardwell is seeking $900,000 in damages for loss of care guidance and companionship, loss of income and for costs associated with the nursing, attendant care and other services provided to Engel. He is also seeking damages for nervous shock, intentional infliction of mental suffering and emotional distress.

Engel’s parents are seeking $700,000 in damages for loss of care, guidance and companionship and for costs associated with nursing, attendant care and other services given to Engel, while her siblings are seeking $200,000 on a similar claim.

The lawsuit alleges the incident was caused “entirely by the individual or combined negligence” of the defendants.

It further claims that Thompson didn’t know how to properly operate the fireplace, disregarded warning labels, failed to take safety precautions, failed to warn guests of the danger, failed to read instructions, and allegedly squirted liquid ethanol onto an open flame.

The lawsuit states ”he otherwise breached his duties as an occupier of premises.”