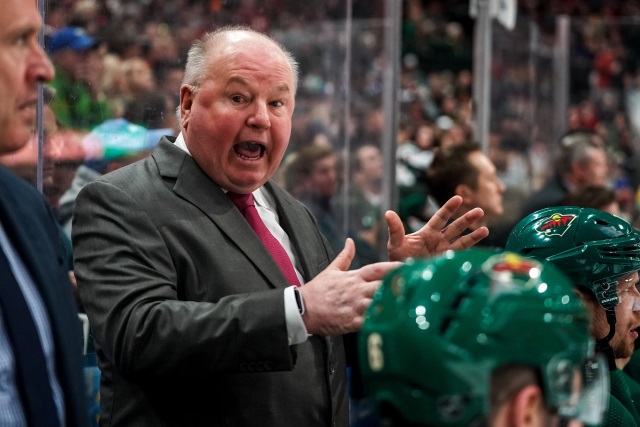 Chip Scoggins of the Star-Tribune: Minnesota Wild owner Craig Leipold doesn’t want to rebuild and desperately wants the Wild to be a playoff team.

The Wild are not a cup contender, maybe a fringe playoff team, and have a bunch of players who have no-trade clauses.

Whoever the Wild hire as their GM won’t have a true No. 1 center. The team has many veterans who have no-movement clauses and are on the downside of their careers. They have a group of unproven young players.

The Wild are in a tough spot.

Michael Russo of The Athletic: So you can scratch Don Waddell off the Minnesota Wild’s GM list.

Sources have said that the Wild wanted to speak with Columbus Blue Jackets assistant GM Bill Zito and New York Rangers assistant GM Chris Drury, but were denied by both teams.

Owner Craig Leipold should be back in Minnesota now and it’s believed they’ll talk with more candidates before moving on to round two of interviews.

Michael Russo of The Athletic: Aside from Hextall, Guerin, and Fitzgerald, other top candidates include Montreal Canadiens assistant Scott Mellanby and London Knights (OHL) co-owner and GM Mark Hunter.

From an interview with head coach Bruce Boudreau – what the Wild’s line combinations could look like at the start of camp.

“You know, I’ve been looking at a couple things that I put on the board. I guess before I answer that, I should make clear that a lot of it depends on how Mikko’s health is, how his leg is. In other words, are we going to have to start him slow or is he ready to go off the bat? So I’ll preface everything that a lot of this depends on Mikko and that these are things that are just going through my head in early August. Anything can change next month. But Staal will start as the No. 1 center, and I’m looking at him with Zucker and Zuccarello. On the board, I really like the look and sound of Parise, Kunin and Fiala. And then, Mikko’s health will probably determine the other combinations. It’ll probably start with Mikko or Ek with Donato and Greenway and then (Marcus) Foligno with the other center (Ek or Mikko) and Hartman with J.T. Brown and Victor Rask pushing.”

Penguins trade for Barber, Varone
Chris Phillips has his No. 4 raised to rafters by Ottawa Senators
Kelowna Rockets fire head coach Adam Foote, father of the WHL team’s captain
Bruins or Avalanche Are Best Bets for Kreider Trade
Ovechkin strikes early vs. Habs, one shy of 700