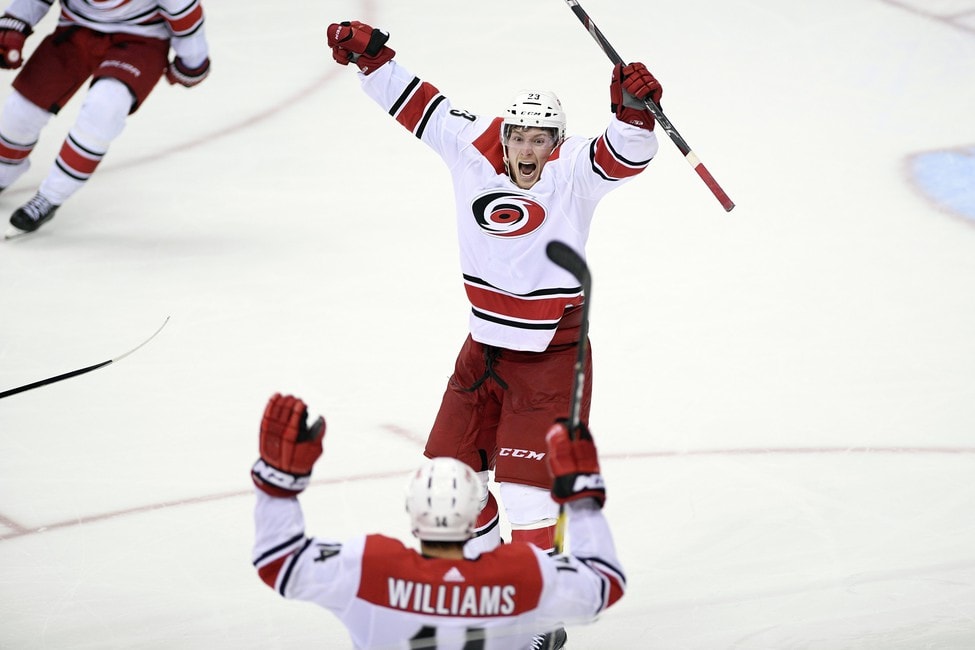 Making the playoffs last season was fantastic for the Carolina Hurricanes and their fans. Can they build on that momentum and make it back to the postseason next season? A couple of thoughts stand out as key to achieving that goal.

We touched on the importance of Hurricanes captain Justin Williams in a piece posted on June 29 that posed the question of whether the Hurricanes can maintain the momentum that Williams began? If positivity and a “never give up” mentality are like trees, will they bear fruit when he is gone?

Most fans see Williams’ incredible influence, especially since being named captain at the beginning of last season. Folks are still shaking their heads over former head coach Bill Peters’ decision not to name him captain, but instead go with a two-headed captaincy with Jordan Staal and Justin Faulk sharing the ‘C.’

It’s hard to forget this gem written by Luke DeCock of News & Observer:

“Williams was the obvious choice last season, only to be kneecapped by Peters’ dopey co-captaincy, an idea so bad that the ostensibly demoted co-captains both agreed Thursday that it was a bad idea and they thought so all along,”

The truth is that Williams is a dynamic driving force but he has Hurricanes head coach Rod Brind’Amour pushing him along with the rest of the team. Williams is a powerful voice, but would not be nearly as strong without Brind’Amour’s encouragement to reach down and give everything they have every time they take the ice.

After all, it was Brind’Amour who undid the Peters’ co-captain experiment – remember the season prior to last, Peters named four alternates instead of a captain. The Hurricanes were struggling to find a consistent voice in the locker room and it was Brind’Amour naming Williams that brought the much-needed consistency.

Even though the Hurricanes’ leadership flows from Brind’Amour, Williams is still a wild card. The question on everyone’s mind is will he retire or keep playing? At a press conference recently, Hurricanes general manager Don Waddell deflected the urgency of a decision from Williams saying there are guys in Charlotte ready to play.

For example, if Williams decides on Sep. 3 that he is hanging up his skates, Waddell implied that it would not be a big deal. Management would insert a player from the Charlotte Checkers in Williams’ place. But, it’s unlikely Waddell meant his comment to be taken literally, but rather he was making the point that he’s not worried about no having a decision from Williams about his status for next season.

The first factor that will determine whether or not the Hurricanes make it back to the playoffs is Williams. If he returns it is the equivalent of a lot of points. If he does not return, the team is not necessarily counted out, but will have to respond to Brind’Amour more directly than through a locker-room leader like Williams.

There is no doubt that Brind’Amour is the difference that helped the Hurricanes make it to the playoffs last season. But it can be argued that it was Williams who internalized Brind’Amour’s passion, planted it in the locker room and made sure it grew. A ‘Canes team without Williams will definitely have to adjust. It’s not that they won’t adjust or can’t, it’s just that Williams makes that much of a difference to this team.

Have the ‘Canes Improved?

The second factor that will come into play is the roster, as it stands after an active June. Has anything really changed? Petr Mrázek has been signed as the starting goaltender. A backup has yet to be named and will likely not be until closer to the exhibition season.

Erik Haula is new, a real change to the roster. If he is one hundred percent healthy and has recovered from his knee injury, he will be a positive addition to the forward lines. Getting Haula could be the offseason acquisition that Waddell can hang his hat on in a few months.

On defense, the Hurricanes lost Calvin de Haan via trade. This move could offset the possible bliss of the Haula trade. The Hurricanes have been a strong team defensively and De Haan fit in nicely during their playoff run last season. Replacing him with Haydn Fleury or possibly Jake Bean is going to be a shot in the dark.

Will Williams stay and if not, the team respond directly to Brind’Amour without his friend Williams echoing his refrain of grit and grind? Do the Hurricanes need another forward or defenseman or or is the roster as is a playoff caliber roster?

The good news is we’ll find out pretty soon. The Hurricanes open their exhibition season at home on Sep. 19 against the Tampa Bay Lightning.