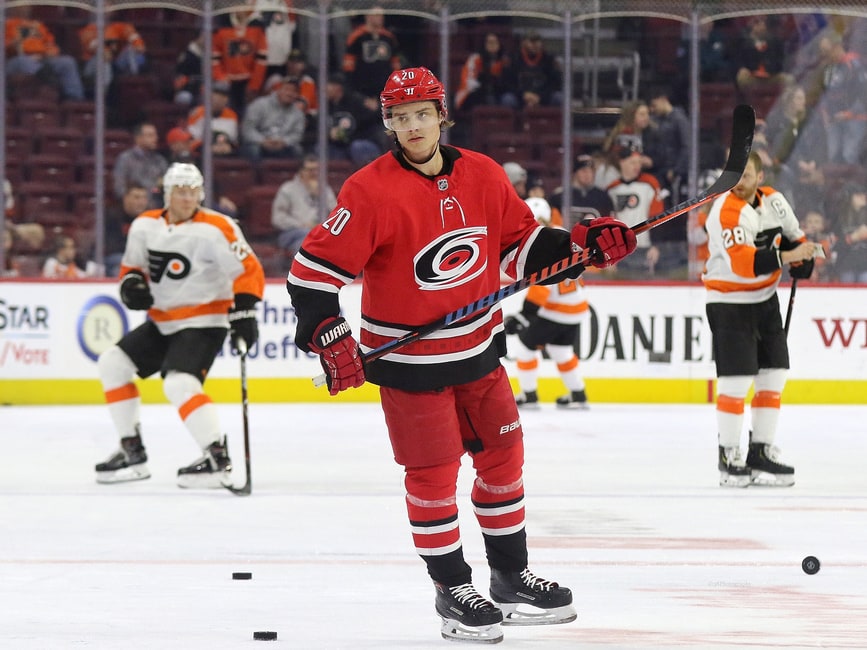 The Montreal Canadiens have tendered an offer sheet to Carolina Hurricanes’ restricted free agent Sebastian Aho. The proposed contract is worth $42.25 Million over five years and would carry an annual cap hit of $8.454 million per season.

Important to note here is that the Canadiens would have had to pay two firsts, a second and a third-round pick if the deal was worth between $8.5 and $10.6 million. They narrowly avoided the second-highest range with this offer.

As Pierre LeBrun breaks it down, the full deal looks as follows:

Bob McKenzie would also point out that the deal pays Aho $21 million in the first 12 months. This could serve to be restrictive based on revenue made in Carolina, but that doesn’t mean the team would be opposed to signing this as it does present a lower cap hit than the $9.5 million annual cap hit many expected Aho to command.

Canadiens Looking for a No. 1 Center

For the Canadiens, Aho would prove to be the No. 1 center that the team has been in search of for decades.

A soon-to-be 22-year-old who was taken 35th overall in 2015, Aho has proven to be one of the steals of his draft class. In his rookie season, he’d score 20 goals and 49 points in 82 games. He’d improve on those totals with 29 goals and 65 points in 78 games in his sophomore season before breaking out with 30 goals and 83 points in 82 games last season.

Related: A Look Back at NHL Offer Sheets

This is the first offer sheet that has been signed since Ryan O’Reilly signed a two-year, $10 million offer sheet with the Calgary Flames back in Feb. of 2013. The deal was matched by the Colorado Avalanche, keeping O’Reilly with the Avalanche until the team eventually traded him to the Buffalo Sabres a few seasons later.

For the Hurricanes, this decision doesn’t need to be made quickly. If the Hurricanes want to do other teams a favor, they can let this go the full week before deciding to match the contract or not, which would limit the Canadiens from signing another offer sheet until that time. In that week, teams could sign their own restricted free agents to deals.

At the same time, the Hurricanes have no reason to help any other team outside of the hope that opposing general managers would help them in the future.

More than anything, though, the Hurricanes have to decide whether or not this deal is worthwhile for them. On paper, a first, second and third-round pick is nowhere near enough as far as assets to lure Aho away. The contract’s annual value also isn’t too restrictive given how talented and young Aho is at this point in his career.

As mentioned, though, the $21 million in the first 12 months is significant and could give the team pause. An important note here, though, is that the Hurricanes are owned by Tom Dundon who doesn’t seem like the kind of person to be afraid of a number like that, regardless of how daunting it may seem.

It’ll be interesting to see what happens with this situation as offer sheets truly are rare in the NHL.