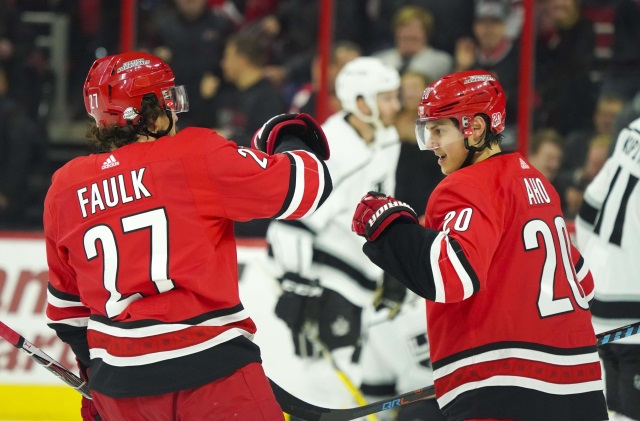 Hurricanes had some good talks with Faulk’s camp

Chip Alexander: GM Waddell said that they had some “good talks” with Justin Faulk‘s camp at the draft in Vancouver. Talks will continue and there is no urgency for them to get a deal done. “If he stays on for last year of contract we’re OK with that.”

Sara Civ: The Calvin de Haan trade clears more salary cap space which could lead to more moves. The Hurricanes need a goaltender. If they are going to buyout goaltender Scott Darling, they needed to acquire another goalie.

Hurricanes offering only $6 million for Aho? Offer sheet talk, and the need for a goaltender

The Hurricanes can and will match any offer sheets for Sebastian Aho.

“The Aho one is interesting, Bob . You and I have talked about it on the show before. I think if, and it’s a big “if” still, there was an offer sheet to come, I would put the offer sheet to Aho at the top of the list for me.

I keep getting told that the Hurricanes are talking a max terms at $6 million, which by the way, isn’t as much as Marleau will make next year. But you know darn well that somebody could probably come in and buck that number way up, for what Sebastian Aho is.”

“I’m confident we’ll get him signed and get it delivered before we start training camp, but there’s not a timetable that’s going to happen this week or next week,” Waddell said.

“It’s been daily conversations with Mrazek, not so much with Curtis,” Waddell said. “I feel optimistic about signing a No. 1 goalie, and Petr’s certainly in the mix as we speak.”

The Hurricanes traded for goaltender Anton Forsberg on Monday. They are trying to trade goalie Scott Darling, but it’s more likely that they will buy him out.

When the Hurricanes traded for Patrick Marleau on Saturday, Waddell said that they made the trade with the intent of not having to buy him out.