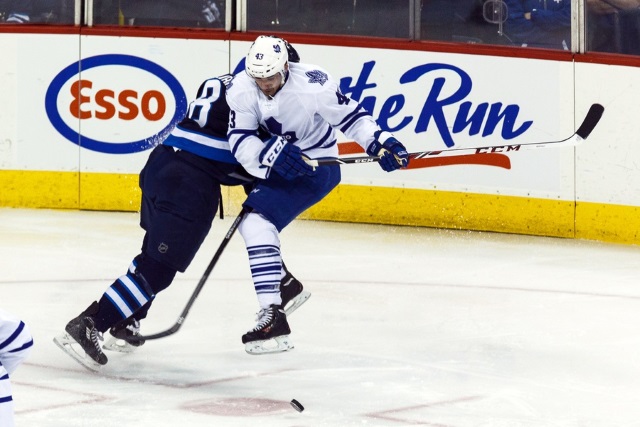 Pierre LeBrun of The Athletic: One source has said that the Boston Bruins have talked internally about bringing Marcus Johansson back next season. He stock has increased of late and he might have priced himself out of Boston.

He’s dealt with injuries the past two seasons and he’s been carrying a $4.85 million cap hit for the past three years.

Mike McIntyre: Source saying there is nothing to Sean Avery‘s ‘report’ that a Jacob Trouba for Nazem Kadri trade is happening.

Ken Wiebe: Do believe that Kadri would make a lot of sense for the Winnipeg Jets.

Matt Larkin: Not a one-for-one of Kadri for Trouba, but it makes sense as both would fit team needs. Would have to assume that the Maple Leafs would need to include more.

Roslovic was unhappy but never requested a trade

Aaron Portzline: Winnipeg Jets center Jack Roslovic fired his agent. Sources said that Roslovic asked for a trade at least once during last season because of his role with the team and lack of playing time.

Mike McIntyre: Claude Lemieux is now Roslovic’s agent. Can confirm that he wasn’t happy at times and that his old agent had many talks with GM Kevin Cheveldayoff.

Roslovic will be a restricted free agent after next season. He was the first star of the month for February, but then had his ice time reduced. The Jets did get trade offers for him but they turned them down.

He’s on a team friendly contract and there may be more opportunity for him next season.

Kenneth Robinson: (Roslovic’s former agent – responding to Portzline’s above tweet) Jack Roslovic never once asked the Jets for a trade. Yes, he wasn’t happy with this role, but he had a right to be.

Kenneth Robinson: No trade request was made. “He wanted off of the 4th line, not off of the Jets. No truth to that rumor. I should know. I’m the guy he fired.”