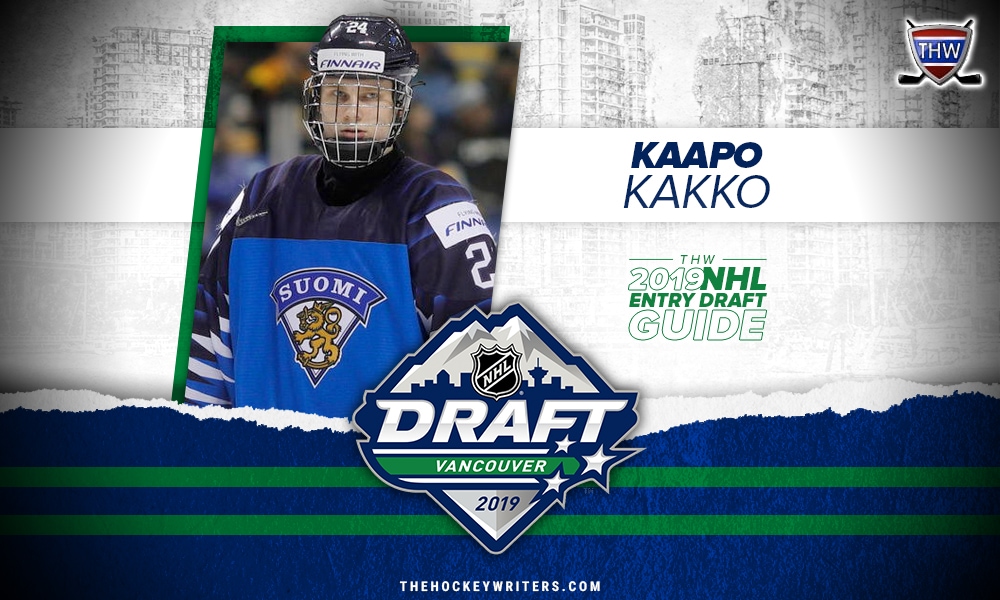 The unanimous number two in the upcoming draft, Kaapo Kakko is the top international prospect that teams will be looking to draft this offseason. By all accounts, the 18-year-old Kakko comes with a ton of upside and very little to pick apart.

He sees the game like few others and always seems to be one step ahead as the play unfolds. As a winger, Kakko has spent some time down the middle this season with TPS expanding his abilities so that he could possibly play center at times throughout his career. 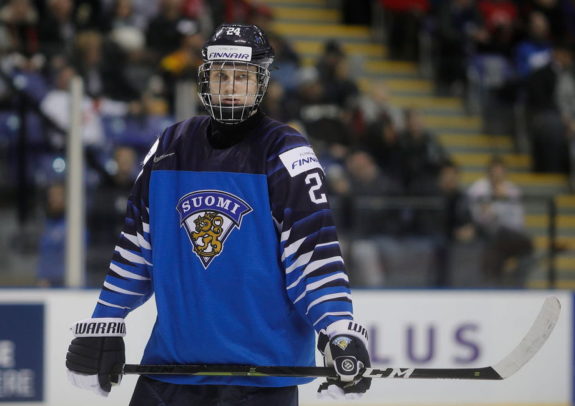 In his first full season with TPS, Kakko scored a record-breaking 22 goals in 45 games – adding 16 assists to his total. The record originally belonged to Aleksander Barkov who scored 21 goals as a rookie in the SM-Liiga.

While some have compared him to the likes of Barkov and Jesperi Kotkaniemi, others are saying that he has the offensive potential of Patrik Laine with better defensive skill and responsibility. Either way, it’ll be something when Kakko makes his NHL debut and he should give NHL fans a lot to talk about for many years to come.

Behind Jack Hughes, is there any indication that Kakko could drop from number two? No. He’s expected to go second overall and will – unless by some miracle a team has an inkling on one of the players behind. With that being an unlikely occurrence, Kakko will be the first winger off the board at number two.

“A quick-thinking winger, Kakko never seems to be in a rush. He reads the game exceptionally well and finds himself a step ahead while the play is still developing. He is confident with the puck and capable of handling it in small spaces. With decent size for a player of his age, Kakko protects the puck well and uses his high hockey IQ to make smart offensive plays. He plays a mature game and is already strong enough to compete with men in the Finnish Liiga. Kakko excels offensively and beats opponents with smarts and skill both on and off the puck.” – Matias Strozyk/Elite Prospects

“Kaapo is a skilled player. Really good in the corners, sees the game really well, passes well and he’s got really good character. He’s going to be a great NHL player, he has all the capacity.” – Jussi Ahokas/Finland Coach

“Multi-tooled winger with size and coordination who incorporates his impressive puck skills with a desirable physical package that consistently exhausts opponents…Blessed with incredibly soft hands and tight-quarter quickness, Kakko is a reliable stickhandler who uses timing plays to either get open or create space for his linemates.” – Steve Kournianos/The Draft Analyst

“I think he’s the best prospect from Finland since Barkov. He doesn’t have any major flaws, is a beast physically and tremendous when protecting the puck. He has worked hard this summer and that’s why he’s ready now.” – Toni Rajamaki/Future Considerations

Under Construction (Improvements to Make)

Skill. Size. And physicality. Is there a better package to form a top-six (and likely top-line) forward? Now, not only is he playing the wing, but Kakko has spent some time up the middle in Finland and has the potential to become a top-end winger in the NHL with the ability to play center.

His case might already be full by the time he cracks an NHL lineup, but it won’t stop Kakko from continuing to add to his list of accomplishments. Over the past two seasons, Kakko has put his name next to some league and international awards – including Jr. A SM-Liiga Rookie of the Month in October in 2017-18 as well as the Rookie of the Year for that league. That year he also capture a gold medal at the U18 World Junior Championship and was named as one of the top three players on Finland.

Fast forward to 2018-19 and he finished the year with the most goals by a rookie (22) – breaking Barkov’s record of 21 in the SM-Liiga and won another gold medal at the U20 World Juniors.